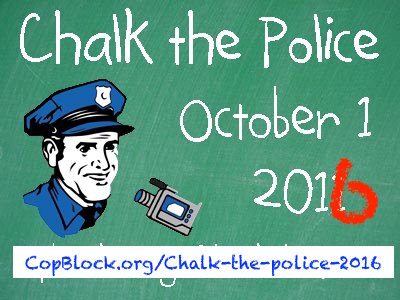 Every year, since 2011, folks associated with “CopBlock” have been putting on two chalking related events. The first is July 18th and is dubbed “Chalk the Police State” day. The second is “National Chalk the Police Day” which falls on October 1st.

“National Chalk the Police Day” was started by myself and Pete Eyre after we (and 7 others) were arrested for chalking a Police Station in Manchester, New Hampshire in 2011 (see video below). We were protesting four Manchester police officers who were NOT going to face charges after they beat a man while off duty at a bar. Of course the police officers weren’t held accountable for their actions but the police had no problem caging me (along with another) for 60 days for chalking “Badges Don’t Grant Extra Rights” and “Everything is OK.” They called it graffiti but the fact is I didn’t harm anyone nor did I destroy any property.

Those four officers cannot say the same but they never saw the inside of a cage.

Since 2011 “Chalking the Police” has become more and more popular, to the point where nearly every single police related protest seems to have chalkers present. Sure, arrests for chalking still happen from time to time – as Brian and I proved last year in Noblesville, IN – but no where near as often as 5 years ago.

And there has never been an arrest at a National Chalk the Police day event, not even Joe Arpaio had chalkers arrested.

We hope that this year will be no different.

So mark your calendars for October 1st and buy all the children’s chalk from your local stores! Don’t forget to bring your cameras too!

Below is a list of “National Chalk the Police” Events:

If you’re hosting an event, feel free to contact us so we can add yours to this list and promote it via the CB FB page!

Past Chalk the Police Videos: