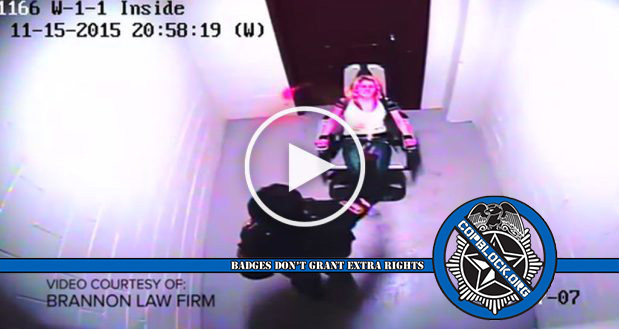 Video has been released as part of a lawsuit that shows an Ohio woman being pepper-sprayed by a police sergeant while being held in a seven point restraint chair.

Filed in Dayton District Court on Tuesday, the lawsuit says that 24-year-old Amber Swink had been drinking heavily on Nov. 15, 2015. She was taken by Clay Township police to the Montgomery County Jail where staff were informed that she was acting belligerently.

Video recorded from inside the jail shows Sgt. Judith Sealey, who the lawsuit says has since been promoted to captain because of political reasons, vindictively spraying Swink directly in the face as she sit helpless in the harness.

Swink had already been sprayed once before being placed in the restraint in an isolation cell, according to the suit, which names as defendants the Montgomery County Board of Commissioners, Sheriff Phil Plummer, Sealey, Capt. Chuck Crosby and others

The lawsuit alleges departmental policy violations, a cover up and claims excessive force “that amounted to torture” engaged in by Sealy – who was the highest ranking officer on duty at time. Swink says she now suffers from chronic breathing problems because of the incident.

“It felt like somebody just crushed up fresh peppers and made me use them as face cream,” Swink said. “I remember my mouth was filling with a thick slobber, like foaming up — and that was also blocking my airway… I thought I might die.”

The surveillance footage shows Swink coughing after being sprayed before she appears to pass out. A medic would be required to perform sternum rubs until she finally regained consciousness.

Having seen the video, sheriff Plummer said Wednesday that Sealey’s actions were a violation of policy and maintained that she had been given a “letter of caution,” which would remain in her file for six months. It does not appear that she will face any further disciplinary action.

“She shouldn’t have sprayed her in the chair. I’ll admit she was at fault,” Plummer said. “She was dealt with… [Swink] was, according to the report, yelling and screaming, and [Sealey] sprayed her. It’s nothing we train and condone and that’s why she’s disciplined for it. She made a mistake.”

The lawsuit states that when pepper spray is used by the sheriff’s office, a use-of-force report is required – but said Sealy did not file one “so that there would be a lack of evidence of the excessive use of force… and less likelihood that the matter would be made public.”

Additionally, the suit claims that “several private meetings were held” by the sheriff’s office in order to determine how to cover up what had occurred with officials asserting that information pertaining to the case should be “intentionally destroyed.” It is alleged that officials committed a records retention policy violation by saying the video could not be located.

The lawsuit also says that the promotion of Sealy to captain was “political and racially motivated” when Plummer fired Capt. Thomas Flanders and Detective Michael Sollenberger for “racist text messages” and a “back door” deal was struck to promote Sealey under pressure from Dayton Unit NAACP President Derrick Forward.

“I’m very concerned with the fact that [Sealey] was promoted, No. 1, in light of such egregious conduct,” Swank’s attorney, Douglas Brannon said. “Personally, I think she should have been prosecuted immediately and criminally prosecuted for assault on my client.”