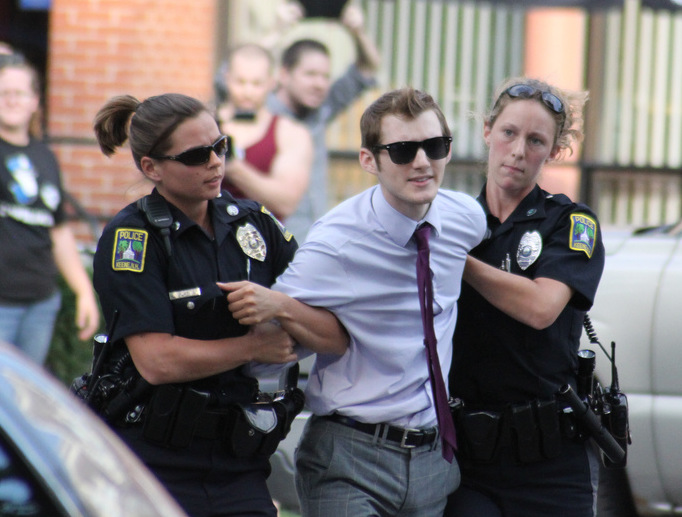 I’m Ian Freeman, the executive producer of Derrick J’s Victimless Crime Spree, the most epic Cop Blocking movie ever.  There are a lot of great Cop Block videos out there, but nothing with a narrative like this feature-length documentary.  When you watch it, you’ll see Cop Block founders Ademo Freeman and Pete Eyre get arrested here as well as tons more epic footage from the home of Cop Block, Keene, NH.

I’ve done a lot in my 36 years, but this is one of the most important. I’m grateful to have helped make this epic movie possible. Thank you to Derrick J Freeman and Beau Davis and all the great activists (and the bureaucrats!) who helped make Derrick J’s Victimless Crime Spree a reality. We couldn’t have done it without you. Here’s the full movie, free on YouTube, as it has been since day one, followed by Derrick’s thoughts on this fourth anniversary of the theatrical release below that:

I could technically still be in jail today for the “crimes” from the movie.

Derrick J’s Victimless Crime Spree, a full-length feature documentary about my five arrests in Keene, New Hampshire, unleashed itself to the world in Keene Cinemas four years ago today. It’s been viewed on YouTube over 175,000 times.

The world has changed since then. Recording law enforcers is now commonplace. Enforcers in a dozen more states now leave peaceful pot smokers alone. The top series on Netflix is a show about prison overpopulation. Everyone knows that the people calling themselves “the government” spy on their computers, emails, phone calls, and texts, but digital privacy is now possible for all thanks to new apps and devices with built-in encryption. Cryptocurrencies like Bitcoin are now beginning to come into wide use.

There’s a lot of reason to be hopeful. Now more than ever, the world is ready for you to question your obedience. Dozens have told me the movie inspired them to move to New Hampshire. That’s the most rewarding part of the experience. In the end, I was facing 9 years if convicted of all charges (none involving a victim). I was sentenced to 540 days in jail, and I ended up serving 60 for my “crime spree.”

Friends made it possible: Ian Freeman (producer), Beau Davis (editor), and the people of the Shire Society who inspire action. I hope Victimless Crime Spree inspires you to achieve more freedom, peace, happiness, and the object of your dreams.