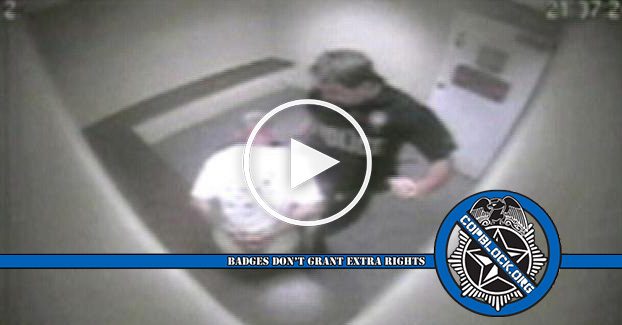 A former Orlando cop has been found guilty of felony battery for a 2014 incident that resulted in a man enduring a ruptured spleen.

An Orange County jury ruled on Wednesday that Officer Peter Delio caused great bodily harm to 42-year-old Robert Liese when he kneed him in a holding cell during an incident that was captured on surveillance video.

Liese was arrested on Aug. 12, 2014 by Delio after he failed to pay a bar tab in downtown Orlando. He was drunk at the time and was seen on the video pacing around with his hands cuffed behind his back in the holding cell.

Angrily, Liese slams his head against the glass window of the cell door, breaking it. The footage then shows Delio running into the cell and kneeing Liese in the midsection before moving him into a different cell.

Officers reportedly did not respond to Liese’s requests for medical attention for about an hour and 50 minutes. When he was eventually taken to the hospital it was discovered that his spleen was ruptured.

Liese also exhibited heavy internal bleeding and doctors were forced to preform emergency surgery on him in order to remove his spleen. He would recover in the following weeks.

Following the incident, the Orlando police department launched an internal affairs investigation that found that Delio had used excessive force. He was first suspended for a week without pay and then fired last September.

Sgt. William Faulkner was also fired as a result of the incident after officials said he ignored Liese’s cries for help at least 35 times. In a civil lawsuit filed by Liese against Delio, a federal jury found Liese’s civil rights were violated but he was not awarded any damages.

On Wednesday, jurors took only an hour and a half to reach their verdict after about a day and a half of testimony. Delio is now being held in the Orange County Jail on a $7,500 bond. His sentencing has been scheduled for Nov. 9.

Delio’s defense attorney, David Bigney, had requested a bench trial in which a judge alone would decide the case – but that request was denied however, with prosecutors opting to put the case before a jury.

The felony conviction will now prohibit Delio from working as a police officer in Florida but not in other states. He faces a sentence of up to five years in prison and fines of up to $5,000.