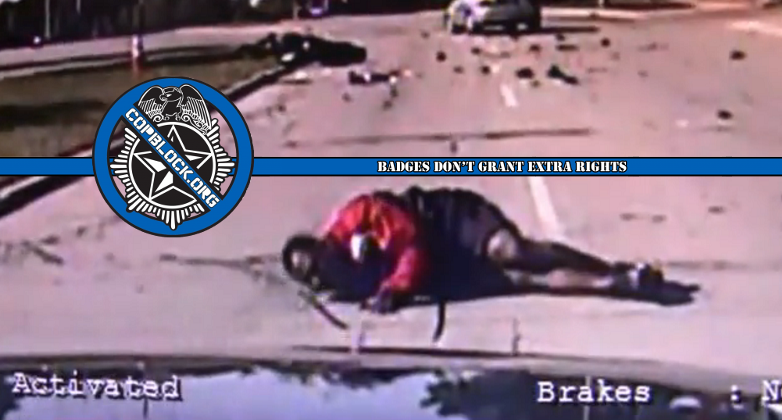 Recently a local news station conducted an investigation after learning that a newly hired officer at Wisconsin police department was previously fired for misconduct. Not only that, but it turns out that Police Captain Steve Lesniewski, who recommended that officer be hired, knew about his history and failed to disclose it.

Back in 2012, then Milwaukee PD Officer Kurt Kezeske was involved in a high speed chase with a motorcycle that included “blazing through Bay View blowing through red lights and stop signs, nearly hitting a semi, and driving over a curb.” The chase eventually culminated in the cyclist almost being killed and another driver’s car being totaled. (See embedded video below.)

Except in the case of violent felonies, high speed chases had been banned by the Milwaukee Police Department two years earlier. Due to that policy and the fact that he lied, both during and after the chase, about the motorcycle attempting to ram his police car to justify it Kezeske was fired.

None of that was disclosed to administrators involved in hiring police officers in the Village of Eagle. Instead, they were just told about his 18 years of experience. Greg Hein, chairman of the Eagle Police Committee that vets candidates, has no recollection of that being mentioned. According to Hein, they based their recommendation to hire him on Captain Lesniewski’s positive referral.

The Eagle Village Board of Trustees in turn voted to approve his hiring based on the recommendation of the Eagle Police Committee. Village Supervisor Mike Rice states that had he known about Officer Kezeske’s history of committing perjury on official police reports and to investigators he would not have voted to hire him. Captain Lesniewski for his part admits to knowing about Kezeske’s history, but uses the old fall back of it being a “personnel matter” to avoid commenting on the issue.

Of course, people might say, “this is just one small town with just a handful of cops that got duped into hiring a proven liar to a position that has the power to throw people into jail based on his word or even “fear for his life” knowing that he can lie and get away with it, then just go apply for a police job in another city.”

However, this is far from an isolated incident. The Village of Eagle is just one example of the rampant problem of bad cops moving to a new city and getting rehired as a police officer. In fact, in the state of Wisconsin over one-third of cops fired by one department are now working in another department within the state.

Kezeske is hardly the first fired cop to get hired by another department.

The FOX6 Investigators asked the Wisconsin Department of Justice for a list of every police officer in the state who’s been discharged from duty since 2012 — and where they work now. It took the department 42 days to turn over the list. And when they did, every officer’s name was blacked out.

In a letter to FOX 6 News, attorneys for the Department of Justice argue that releasing officer’s names might subject them to personal attacks and could have a chilling effect on recruitment. The records they did release show that more than one-third of the officers discharged since 2012 are already back on the job somewhere else.

Sharon Royston says she’s not surprised it happened in Eagle.”I don’t think it should’ve happened,” she said, ” I was never allowed to see any background checks. Never.”   Royston is a former member of the Eagle Village Board, ” 40% of our village budget is going towards the police department and I didn’t think, and a lot of villagers didn’t think, we were getting our money’s worth.”

It was Royston who exposed a secret deal that allowed the last police chief to retire with a two-year severance package. A highly unusual deal the village is still paying for, but can’t explain  because of a confidentiality agreement.  “We’ll never know. They are prevented from telling any details,” Royston said.

So Royston spearheaded an effort to eliminate the Eagle Police Department and have Waukesha County patrol instead, but voters shot it down. That was before officer Kezeske was hired full-time in May.

After the Fox 6 Investigators started asking questions, the Eagle Police Committee met to talk about their hiring practices, but they declined to talk about any officer in particular.

Rice says he never would have voted to hire Officer Kezeske had he known about his background.

“The biggest thing is the falsifying reports and I think that would concern anybody here,” Rice said.

But the one man who admits he knew, didn’t seem to share his concern.

“Did you know about the background? ” (Fox 6 Investigator) Polcyn asked.
” I did,” Captain Lesniewski said.
” You did? And you were ok with that? Polcyn asked, as Lesniewski walked away.

It’s kinda odd that all these Good Cops we here about so often never seem to have any concern about what the Bad Apples are up to and are always more than happy to help one of their “brothers” out, even after they’ve been fired for blatant misconduct. And sending the list with every name blacked out was a cute touch by Wisconsin DOJ to keep their end of that bargain.

There’s also several issues beyond what is mentioned in the Fox6 article that points to this being a much larger problem than one-third of the Bad Apples being rehired to point guns at people. Their investigation didn’t look into cops being allowed to quietly resign or retire. I guarantee you that number is dramatically higher than the ones outright fired. And it’s not hard to deduce that their rate of being rehired is a lot higher than one-third.

It’s also not clear from the report whether they looked into fired Wisconsin cops being rehired by out of state police departments. That potentially could change the percentages quite a bit. This obviously isn’t a problem just in Wisconsin, either. It’s not at all unusual to trace the history of police involved in severe cases of misconduct or egregious use of force and find out they have a long list of complaints against them and in many cases a firing or resignation from a different department in their past.