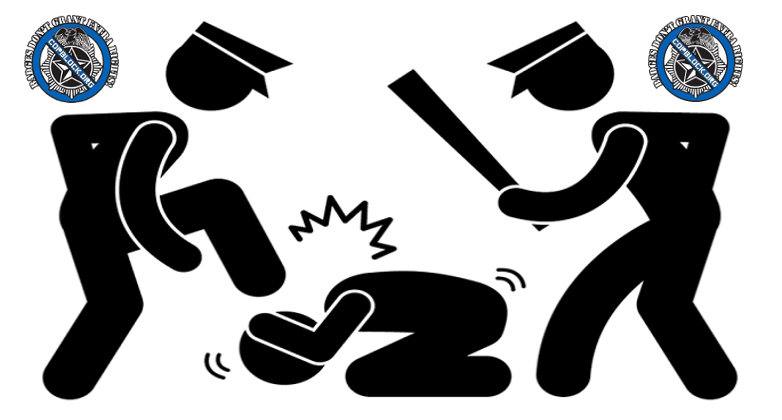 When an off-duty cop saw a man committing the ghastly violent crime of selling DVD’s on the street in front of a Staten Island supermarket, she sprang into action to protect the neighborhood from cheap DVD’s. Soon after, regular customers at the store were treated to the pleasant spectacle of members of the Seventh Largest Army in the World violently assaulting the 60 year old man who is so dangerous that witnesses who regularly greet him say “he’s never bothered anyone.”

The arrest of an accused DVD bootlegger this week outside the Stop & Shop in Eltingville was met with criticism by shoppers and store employees who watched it unfold.

Kung Zhow, 60, is described by those who know him and have bought DVDs from him at the grocery store on Amboy Road as a gentle man who wouldn’t hurt anyone.

But he apparently wore out his welcome Tuesday afternoon when, according to witnesses, a female shopper who identified herself as an off-duty police officer confronted Zhow outside the store claiming he did not having a license.

A crowd of onlookers started to gather.

Uniformed NYPD officers arrived soon after, and according to shopper John Le Vine, wrestled Zhow, who stands about six-feet-tall with a slim build, into custody.

“There were two [officers] on his back cuffing him, and another [officer] grabs the back of his head, and grabs where the cuffs were and scraped his face across the ground,” Le Vine said.

Police said Zhow was flailing his arms at the time of the arrest.

He was issued a desk appearance ticket, and was back outside the store Wednesday selling DVDs…

Zhow had bandages on his elbow and hands, injuries he said he suffered during the ordeal. He did not have any visible marks on (his) face.

When asked about the incident, he pointed to what appeared to be surveillance cameras outside the store and in broken English said, “I call a lawyer.”

Stop & Shop employees and shoppers who regularly greet Zhow outside the store  said that while they’re aware it’s illegal to sell bootleg DVDs, he’s never bothered anyone and didn’t deserve that kind of treatment.

“It wasn’t like he was selling drugs or guns or something,” said store employee Jason Gough. “They could’ve just told him to ‘get out of here.'”

Stop & Shop spokesman Jim Keenoy said the store did not call the police or have anything to do with the arrest.

In spite of the quote above, Kung Zhow obviously hasn’t worn out his welcome in front of the Stop & Shop. The regular customers and even the employees, all whom speak well of him, were upset with the way he was treated by police. In fact, Zhow felt welcome enough to return right back to the “scene of the crime” as soon as he was released from jail.

Reality is that the unwelcome party in this little fable is the off duty cop who showed up in their neighborhood and then felt the need to enforce one of the most victimless crimes possible, along with the group of armed thugs that showed up to violently carry out that enforcement against a well liked and non-violent elderly man.

Unlike Kung Zhow, they bothered plenty of people.