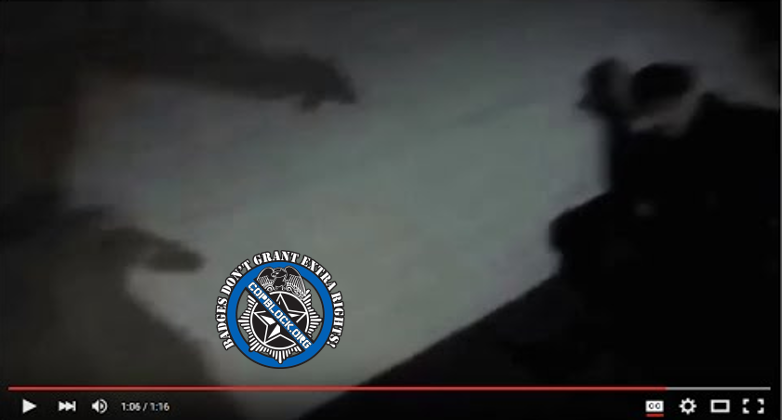 On November 24th of 2015, Thomas McEniry was shot by LVMPD Officers Kyle Prior, Robert Nord, and Donald Sutton III. They’ve claimed that at the time he was shot McEniry had picked a (pellet) gun up from the ground and pointed it at them.

However, if you watch Officer Prior’s bodycam video (embedded below) not only do they cut it off as soon as he begins to put his hand down toward the ground, there is no visible gun at the location where he is moving his hand to. I’ve slowed the video down and watched it frame by frame and I don’t personally see a gun where they claim it was.

It would seem pretty logical that if someone had picked up a gun and pointed it at them, they could eliminate any dispute of it being justified simply by showing them do that. But, for no apparent reason, they didn’t that.

Also, although there was at least one other cop wearing a bodycam that day. Instead of releasing that footage, they released one screenshot showing a gun sitting against the garage door, a position that it could not have been in without being visible on the video.

Without any sort of context for that screenshot (such as the rest of the video showing the gun being discovered and moved to that position), it proves absolutely nothing. Once again, for no apparent reason they didn’t provide that. It’ll be interesting to see if they show the footage of this gun he supposedly picked up and aimed at them and the footage of the second body camera during the review or if they continue hiding the full body cam footage. At that point, you’ll pretty much know there’s a reason they don’t want to release it publicly. (Note: I’ve been told that the family received multiple body cam videos, so it would seem that they do intend to show more than what was initially released, at least.)

These public reviews are really a joke where the cops put out their official story and bury any information that might contradict it. The official title given them, “Police Fatality Public Fact Finding Review” deserves an award for the level of Orwellian doublespeak it represents.

In reality, they were created by former Sheriff Gillespie and the Las Vegas Police Protective Association (police union) to eliminate scrutiny of police shootings after the murders of Erik Scott and Trevon Cole by members of the Las Vegas Metropolitan Police Department led many within Las Vegas to question Metro’s use of force and absolute lack of accountability. Instead of replacing the Coroner’s Inquest that previously was used after police shootings with something more fair and transparent, as the public had demanded, they went the bait and switch route in order to eliminate any semblance of either.

However, it is still good to attend them in order to witness just how much of a blatant coverup it is and to show support for the family and friends of those the LVMPD murder. It also let’s them know we paying attention and aren’t just accepting their cover-ups and lies. You can also submit questions during the review, although they pick and choose which questions are “appropriate” to be asked. That means anything that seriously questions their official narrative and can’t be easily deflected gets filtered out.

If you are unable to physically attend, you can also watch a live feed of the review.