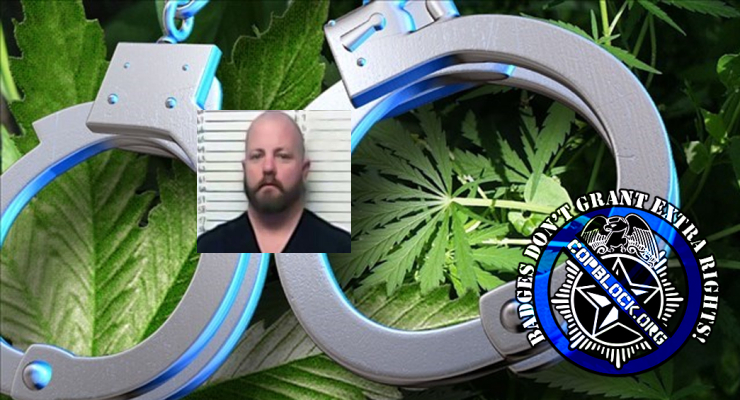 The content for this post was shared with the CopBlock Network by “Kid Clint,” via the CopBlock.org Submissions Page.

This post concerns an officer with the Comanche Police Department in Oklahoma, who was arrested for running a giant marijuana grow operation in January of 2015. As is typical of the hypocrisy shown by many police officers, when Officer Roy Collinsworth wasn’t out busting people for victimless drug crimes he was at home growing and profiting from marijuana.

According to a report, a Comanche Oklahoma police officer was accused of cultivating a marijuana patch inside a shed behind his “Red Hot” liquor store.

The Stephen’s County Sheriff’s Office said they were tipped off to Officer Roy Collinsworth’s marijuana operation and began an investigation.

Collingsworth was apparently surprised when investigators asked him about the drug operation.

According to the District Attorney’s Drug Task Force, when asked about his illegal drug operation, Collingsworth gave them the “No, No” song.

The investigators for District Attorney Jason Hicks then asked if they could have a look around his business.

According to District Attorney Jason Hicks, “He allowed them the opportunity to go through the liquor store and [they] didn’t see anything there, so they asked if they could search another building.”

D.A. Jason Hicks stated that Collingsworth was very reluctant, but after further questioning agreed to let investigators search a building across the street from Comanche Public School. Investigators said, before they opened the door, Collingsworth stopped them and told them about an “old marijuana grow” that was allegedly inside the building.

Investigators said Collingsworth opened the door to the building and said “I don’t want to go to jail.”

Hicks said “It was a pretty elaborate set-up, everything you would need to cultivate marijuana.”

Collingsworth was arrested, but is now out of jail on bond.

No word from Chief of Police Mike Jones since this incident occurred, and no word if the former officer has been charged, or if a court date was set.

According to Oklahoma State Statute: