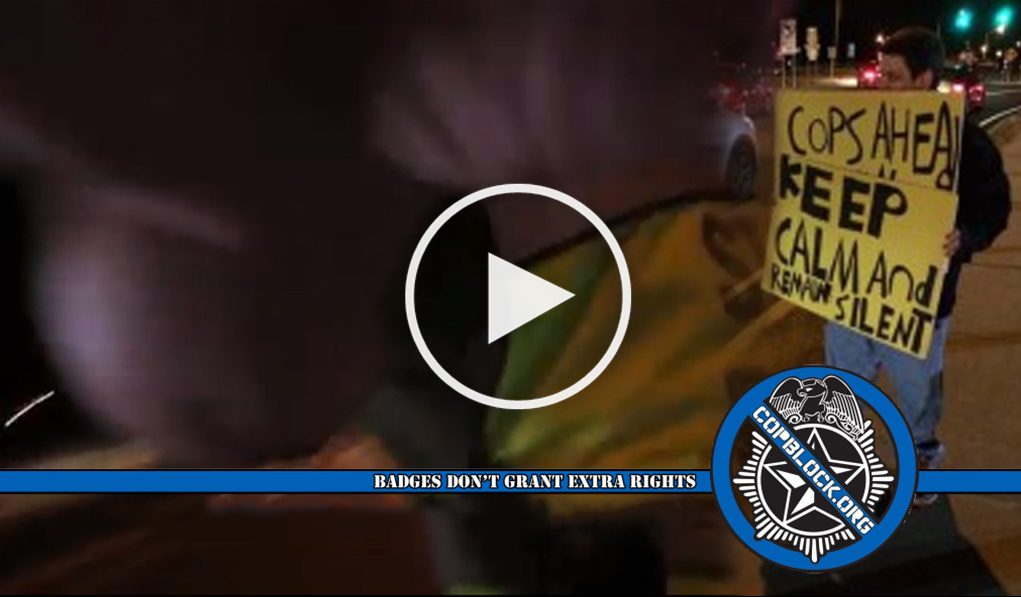 Filed on Thursday in U.S. District Court by the ACLU of Connecticut, the lawsuit says Michael Picard was demonstrating against a DUI checkpoint being conducted on an Interstate 84 off ramp in West Hartford on Sep. 11, 2015.

At times during the protest, Picard would walk up to around several hundred feet away from the checkpoint to the intersection of Park Road, while holding a sign, in order to warn oncoming drivers of the police presence ahead.

“Park Road is not a limited-access road… has sidewalks paralleling it and has no prohibitions against pedestrians walking alongside it,” according to the lawsuit, which asserts that “at no time did Mr. Picard protest by standing in the Park Road roadway or the roadway of the I-84” off ramp.

Connecticut state police were familiar with Picard’s protest activities and were even warned that he would “almost certainly” be protesting the DUI checkpoint, the lawsuit states. In addition, officers were told “Picard was the lawful owner of a pistol” but “is harmless.”

According to the lawsuit, “Picard had been protesting for approximately one and a half hours” when officer John Barone approached him and claimed “that ‘someone called in’ a complaint about a man ‘waving a gun and pointing it at people.'”

As it turns out, “there was never any such complaint to the police that evening,” the lawsuit says – and “when Barone approached him, Mr. Picard was holding a digital camera in his left hand,” which was “swatted… onto the sidewalk, where its battery dislodged.”

The suit states that “Barone did not ask or order Mr. Picard to put the camera down,” and “did not explain to Mr. Picard why he had attempted to destroy the camera.” Instead, the officer “pointed to the pistol that Mr. Picard was wearing in a hip holster, and theatrically shouted to the other [officers], ‘I’ve got a gun!'”

As a result, “Barone pat-frisked Mr. Picard, seized his pistol by removing it from the retention holster… and took Mr. Picard’s pistol permit out of [his] pants pocket,” the lawsuit says. Barone then “took Picard’s pistol and pistol permit” to a police cruiser where officer Patrick Torneo was sitting – and officer John Jacobi and Barone “stood outside Torneo’s window and discussed Mr. Picard.”

According to the lawsuit, “Barone did not handcuff Mr. Picard, tell him that he was being detained, place him under arrest, or instruct him to sit down or stay in one place” – so “Picard picked his camera up off of the ground, reinserted the battery, and turned it back on to see if it was still functional.”

“After Mr. Picard raised the camera in his left hand and aimed it at the [officers] as they conversed, Barone quickly walked back over to Mr. Picard [and] told [him] that ‘it’s illegal to take my picture,’ and grabbed the camera,” the lawsuit states. Picard then “asked for the camera back and told Barone that he objected to the seizure… but Barone told him that ‘it’s illegal’… because… Picard did not ‘get any documentation'” to take his picture.

Barone took the camera and “placed [it] on the light bar mounted on the roof of Torneo’s cruiser, pointed skyward, without turning it off” and it “continued recording until it was returned to Mr. Picard,” the lawsuit says. During this process the phone would record a conversation between the officers that reveals a plot to concoct a narrative and falsely bring charges against Picard.

After the cops confirmed that Picard’s pistol permit was valid, “Torneo instructed one of the [officers] to ‘have that Hartford lieutenant call me,’ so that [he] could check if Mr. Picard ‘has any grudges,'” according to the lawsuit – which “is police slang for a personal bias held by a police officer against a person because of a dispute or past display of disrespect.”

The lawsuit states that the inquiry “did not uncover any ‘grudges’ against Mr. Picard” but “nonetheless Barone asked the other [officers], ‘do you want me to punch a number on this one? We gotta cover our ass.’… police slang that refers to opening an investigation in the electronic case management system and assigning it a case number… [that] create[s] an electronic trail that can later be used to justify police actions.”

“The [officers] ‘punched a number’ and opened an investigation into Mr. Picard,” the lawsuit says, and “Jacobi and Torneo discussed whether they could charge Mr. Picard with any crimes, [with] one of the two suggest[ing] that any charge would suffice, saying, ‘let’s give him something.'”

“Jacobi suggested to Torneo that ‘we do simple trespass, we do reckless use of the highway, and creating a public disturbance,'” according to the lawsuit, and “Torneo agreed” saying that “the [officers] should issue Mr. Picard a public disturbance charge, ‘then we claim that in backup we had multiple [motorists] stopped to complain about’ a man waving a gun, ‘but that no one wanted to stop and give a statement.'”

The lawsuit says “Jacobi agreed, saying ‘yup, yup’ and ‘okay'” and discussed with Torneo “whether they should charge Mr. Picard with walking in the road” and “the two agreed to do so” before then talking with Barone about “how many criminal infraction tickets Mr. Picard was going to receive, eventually settling on two.”

According to the lawsuit, Picard was charged with “use of a highway by a pedestrian” and with “creating a public disturbance for carrying an ‘exposed loaded side arm in plain view of passing motorists’ because some motorists ‘complained [that he] was holding a weapon in his hand.'” As already mentioned however, Picard did neither of these things so the each charge was eventually dismissed.

The lawsuit names all three officers as defendants and is suing for “Violation of Mr. Picard’s First Amendment Right to Receive and Memorialize Information” with his smartphone, “Violation of Mr. Picard’s Fourth Amendment Right Against Warrantless Seizure of his Property” and “Retaliation Against Mr. Picard for His Expression.” It seeks actual and punitive damages, reimbursement for reasonable costs and attorneys’ fees – and all other relief the Court deems appropriate.