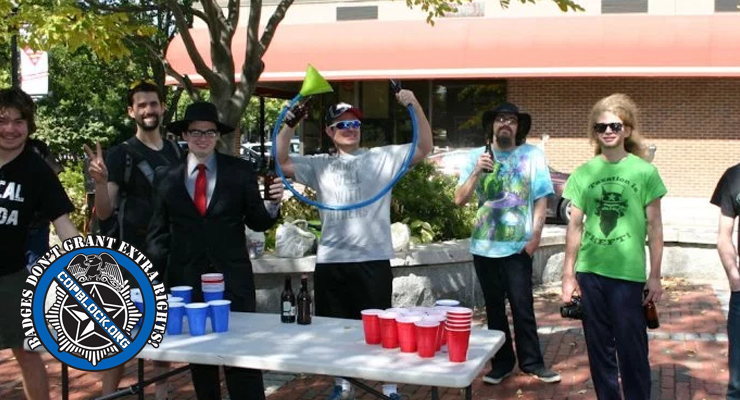 As promised in a press release earlier this week, Keene, NH cop blockers and liberty activists followed through on a promised Beer Pong event in Railroad Square. Held Saturday at noon, the event was intended to call attention to the oppressive open container ordinance here in Keene, NH. Event organizer Bob Call was interviewed by reporters from the Keene Sentinel and Union Leader and explained how the ordinance targets college students and poor people and doesn’t do anything to actually keep drunk people off the streets.

The open container ban does however transfer a lot of wealth to the state from the victims of the police’s aggression. Enforcing open container means big money for the government, and as event co-organizer Chris Waid points out, it also protects restaurants and bars, giving them the exclusive ability to allow someone to enjoy alcohol on the sidewalk. That means the law is discriminatory in that if you can’t afford to pay for a drink at restaurant/bar prices, you can’t enjoy a drink outside in downtown Keene.

Here’s a video covering the over an hour that we were there (police lied to the Union Leader claiming we were only there for 30 mins):

Yesterday’s protest went well and no one was arrested despite the police threatening everyone playing beer pong with arrest. They cited a city ordinance that arguably does not even apply to Railroad Square, claiming playing games involving throwing a ball are prohibited in the area! Either they were bluffing or they didn’t actually read the ordinance, which specifically states that throwing games are banned from Central Square and “on the streets and sidewalks of the downtown area”. I supposed someone could argue that Railroad Square is a street or sidewalk, but there’s a strong argument it’s neither.

Plus, the ordinance is clearly intended to address games that could cause interference in the normal traffic of business in the downtown area: “For the safety and protection of participants, pedestrians, passersby, motorists, and property, no person shall, unless authorized by permit, play games involving running, jumping, throwing, catching, or similar physical activity, including but not limited to games of ball”. Even if it could be argued that Railroad Square is a street or sidewalk, it’s pretty clear that no one’s safety is in jeopardy from a ping-pong ball. The ordinance was obviously crafted to stop frisbee and football players’ projectiles from flying into traffic around Central Square, as it specifically prohibits such activities from that area.

Perhaps that’s why Keene police officers Colin Zamore and Andrew Lippincott never returned after threatening the group with arrest if they continued playing after fifteen minutes had gone by. The activists continued to play for about thirty more minutes and then declared victory and went home.

Police spokesman Thaddeus Derendal lied to the Union Leader reporter when he claimed that the protestors were told they needed a permit to set up the table. I was there the entire time and never heard that, nor did the event organizers. Further, as we proved with the many Free Keene Fests that have been held in Railroad Square in past years, no permits are necessary to set up a table in a public park or common. Free Keene Fests have featured multiple canopie tents, tables, food sales, open gambling, actual beer drinking, and even amplified music. If you ask for permission to exercise your right, you have converted your right into a privilege. Just flex your rights – don’t ask permission, and don’t apologize!

While police could not find any evidence of alcohol being used, they were also very cautious with their tactics. Had this been a group of college students, you can bet their approach would have been more aggressive. Here they merely observed the scene, looking for probable cause to search, like for clearly labeled beer bottles. They did not ask anyone to hand over their bottles for search as they are known to do with students in the college neighborhood.

Officer Zamore refused to share his opinions about alcohol prohibition, but later was more than happy to share his theory about why he did not believe the activists had alcohol. He explained that if we wanted to make good video that we should have had obvious labeled containers of alcohol. He was almost goading the organizers to make his job easier next time so he could make some arrests.

Chris explained to me that they never had an intention to be arrested but were willing to be if it came down to it. The point of the event was to have fun and start a discussion about the absurdity of the open container ordinance. Those things were accomplished and we got the bonus of the police showing up and looking ridiculous threatening people for playing a silly game in a wide-open common. Enjoy the video! Hopefully we’ll see more fun direct action in Keene again soon.