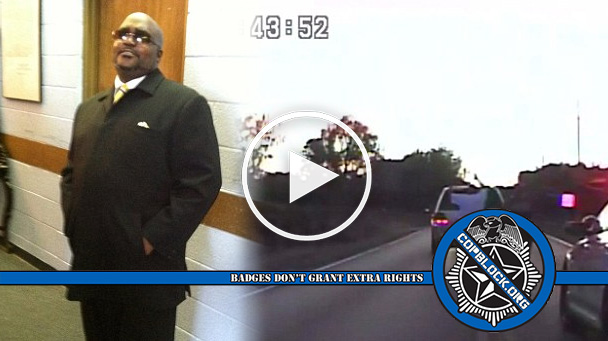 Dash-cam and helicopter video has emerged showing an unarmed Oklahoma pastor being fatally shot with his hands raised by a Tulsa police officer on Friday.

According to police, 40-year-old Terence Crutcher had approached officers after his car broke down and refused commands to raise his hands and reached into his vehicle. He was first tased by officer Tyler Turnbough and was then shot once by officer Betty Shelby.

Police said an officer was responding to another call and saw the SUV in the road and called for backup. The officers then walked toward the vehicle when Crutcher approached them from the side of the road.

“He refused to follow commands given by the officers,” police spokesperson Jeanne MacKenzie said. “They continued to talk to him, he continued not to listen and follow any commands.”

Footage released on Monday however, shows that Crutcher had his hands up as four officers surrounded him by his car when Shelby opened fire. Crutcher died in the hospital on Friday and Shelby was placed on paid administrative leave.

Tulsa police Chief Chuck Jordan called the video “very disturbing, very difficult to watch” and confirmed that no gun was found on Crutcher or in his vehicle. He said that an investigation into the shooting has been launched but did not provide many details.

“It will come out,” Jordan said referencing the probe which will determine whether Shelby’s actions were justified. “I will make this promise to you: We will achieve justice in this case.”

Additionally, the Department of Justice will launch a separate civil rights investigation into the shooting on the federal level. Crutcher’s family was allowed to view recordings of the footage before it was released “so they wouldn’t be blindsided.”

The family is heartbroken and outraged – and plan on filing a wrongful death lawsuit in the case.

“We just want answers, we want to know what happened, there’s a lot of speculation, but there is one thing, one fact that I do know is that my brother was unarmed,” his twin sister, Tiffany Crutcher said. “I’m just devastated.”