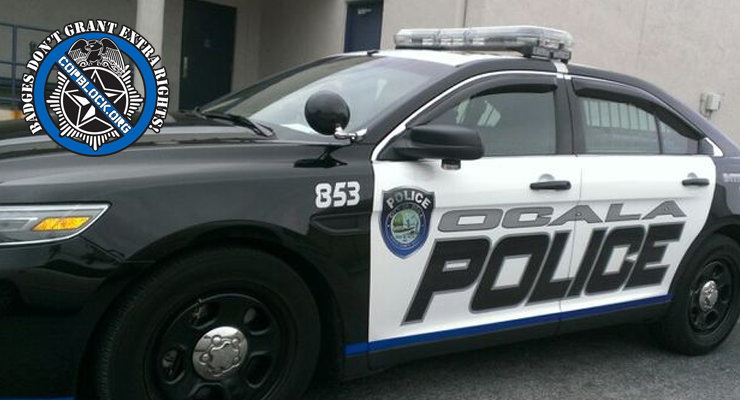 In the Grievance filed by the Law Office of Bobi J. Frank, PA, it alleges that two female Ocala police officers, Rachel Mangum, and Casey Walsh, suffered unwelcome sexual advances and unwelcome verbal or physical conduct of a sexual nature caused by Chief Graham. Officer Tony J. Watts is also a plaintiff in the complaint.

To me, news of an officer being accused of sexual assault or sexual harassment, doesn’t come as a shock. However, given the history of this Police Chief and his relationship with the Mayor, I’m left almost speechless.

Ocala Mayor Kent Guinn, in a recent press conference, just stopped short of blaming the Chief’s victims in this case, stating that “I think the morale [of the police department] has been hurt by the actions of these individuals“. He went on to say that, “The Chief has been attacked, the Chief is well respected in this community and in this police department. People love him.”

Mayor Guinn went on to quote President Ronald Reagan by saying “Guinn said, “My favorite President has a saying, ‘trust, but verify,’ and I trust Chief Greg Graham, and all we’re doing is simply verifying these allegations.”

One last thing to mention, the good Mayor has decided not to suspend Chief Graham, despite his previous history of sexual misconduct on the job.  Back in 2001, then Sgt. Greg Graham, who was married at the time, had a sexual relationship with a Marion County sheriff’s deputy. While I agree that consenting adults should be able to have relationships with whoever they want, the Chief’s previous desire to cross the line at work, shows a pattern of sexual misconduct that gives credence to the new allegations of sexual harassment.

Press Conference By the Law Office of Bobi Frank

Timeline of events as stated in the complaint

“While attending the National Law Enforcement Memorial in Washington, DC a small group of officers went to a bar during evening hours. Chief Graham joined the group and consumed alcohol with his subordinates. During the course of the evening, his behavior became increasingly inappropriate.

The group eventually left that establishment and traveled by subway to another pub/brewery. While on the subway, Chief Graham engaged in conversation with several officers about sexual encounters and jokes about the size of Officer Walsh’s penis and how it was probably larger than most males present there.

When the group reached the next location, and continued drinking, Chief Graham engaged in a game with his subordinates called “never have I ever.” In this game, participants give scenarios in which they have or have not been involved. Chief Graham made statements about “getting f***ed in the a*s,” and “s***ing d**k” while playing the game. He also stated that he wanted to know who had “the best tits at the table.” He directed some of these questions to He directed some of these questions to Officer Casey Walsh, Officer Rachel Mangum, Sgt. Casey Eades, and Officer Ashley Stinehour.

Over the course of the last year, Officer Walsh has had to endure countless attacks of sexual harassment from Chief K. Gregory Graham. Chief Graham is aware of Officer Walsh’s open homosexuality, and almost always intertwines that subject into the conversations that he has with her. It has become commonplace for Chief Graham to make inappropriate comments about the women that Officer Walsh has dated, and has invited as her guest to Ocala Police Department functions. Chief Graham routinely comments on their attractiveness, and inquirers about how she is able to find and date such beautiful women.

Officer Walsh feels as though each time she comes into contact with Chief Graham, the topic of their conversation shifts to her relationship, or her sexual preference, in general.”

Specific encounters as stated in complaint

“Chief Graham made a statement about how he would love it if Officer Walsh dated his daughter, but would be concerned if Officer Walsh came to his home for fear that she would end up in bed with his wife for a sexual encounter.”

“While conducting K9 training at a location close to the Police Department, Chief Graham pulled up to the area and rolled down his window. Officer Walsh was with Sgt. Lisa Bienko and Officer Kyle Howie. After a few minutes of small talk, Chief Graham told Officer Walsh that he had recently seen a photograph of her from the past in which she was wearing her hair down and it was long and dark. He also commented that she was wearing make-up. Officer Walsh responded by questioning what the point was and he replied that he would just leave it at that as to not say anything inappropriate. He made the sound, yum, yum, yum.”

“At the Fallen Officer Memorial ceremony in Ocala, Officer Walsh was approached by Mrs. Graham, the Chief’s wife. Chief Graham walked up to the women during their conversation. Mrs. Graham was expressing interest in doing a ride along with Officer Walsh, but Chief Graham quickly interjected and implied that Officer Walsh would be likely to act in an unprofessional way with Mrs. Graham in her vehicle by engaging in intimate behavior together.”

“In addition to Officer Walsh’s perspective explained above, Officer Mangum suffered additional unwelcome sexual advances and physical and verbal conduct of a sexual nature during the same incident.

Officer Mangum asserts that a drinking game which required one person to ask an inappropriate, mostly sexual in nature question to another participant ensued requiring one person to ask another if they had engaged in the act mentioned in the past. If they had engaged in the act mentioned, they would take a drink of an alcoholic beverage. Officer Mangum left the table to use the restroom. Disturbingly, upon her return to the table, Chief Graham, shouted (it was a crowded bar) “I have something for you…” pointing at Officer Mangum. She responded in a confused manner, and Chief Graham stated, “Never have I ever had a c**k shoved in my a*s!” Officer Mangum was humiliated, disgusted, and offended at the unwelcome, abusive comment. She tried to redirect the conversation so as not to draw attention to herself or the situation at hand.

Also during this time, Chief Graham was continuously bothering Sgt. Casey Eades for her personal cell phone, attempting to unlock the password. They were at times physically sparring; Sgt. Eades in an attempt to keep her cell phone away from Chief Graham, and Chief Graham in an attempt to obtain the phone. During the tussle, Chief Graham kept stating, “let me see your titty pics.” At one point the phone was in Officer Mangum’s possession. Because she was so uncomfortable with the events she quickly put the cell phone on the side of the table where Sgt. Eades was sitting, and stated that she was not getting involved.

Additionally, while all the officers were sitting at the table, Officer Mangum observed Chief Graham take Sgt. Eades by the top of her head, and pull her head onto his lap, in an attempt to simulate the action of performing oral sex on Chief Graham.”