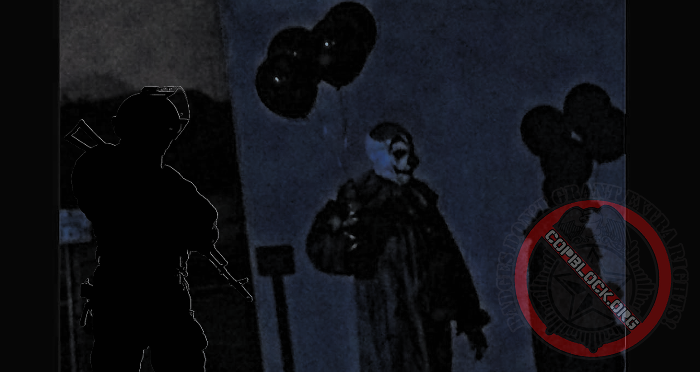 Four Alabama teens have been arrested in Geneva and face potential terrorism charges for making Facebook posts in which they joke about dressing up as clowns.

Someday in the future people will look back for the time when everything changed. That one moment when everything became so insane that humanity shifted forever. That time will be this week.

Yesterday I was crippled with anxiety after seeing the comments online regarding the wanton murder of a completely innocent human being in Tulsa, Oklahoma. It was just beyond me how any human being could watch a video in which a man who had committed no crime and was in need of assistance was immediately treated like a criminal, and then after he obeyed the commands of his harassers was still shot to death in cold blood for no reason whatsoever – and then decide is was justified.

It is not that I did not already know that police supporters and statists were immoral, insane and insufferably willfully ignorant. I just thought there were limits. I had, I thought, finally reached the bottom of the human barrel. And then I woke up today and read a story I thought must have came from outer space.

From the Dothan Eagle:

Teenagers in Geneva and Enterprise were arrested Tuesday as the recent trend of threatening clown posts online continued.

Helms said none of the teenage boys have actually been formally arrested yet, because as juveniles, officers have to file petitions to arrest them through juvenile services. But Helms said investigators are charging all four teenagers with felony making a terrorist threat. He said investigators have already interviewed all four suspects. He also said he understands all four suspects have been suspended from school.

“They did it as a joke, is what they said. As far as we’re able to determine they never had any intent to ever dress up as a clown,” Helms said. “It’s just not very funny.”

Helms said the police investigation showed the teenagers took clown images they found online and created their own Instagram accounts, each making up their own unique clown names.

Helms said a fourth teen made up another one, but never got the chance to post it online.

Helms said some of the posts to social media included threats, albeit vague ones, which included the words “shoot it up in Geneva.” Helms said the posts were indirectly meant toward schools. He said posts made to Instagram were eventually also posted to Facebook.

Helms said once the images made it to Facebook, parents of students got concerned and kept their children out of school on Tuesday.

“I think there were over 205 absences today, and that’s a 16 percent absentee level just because of the hoax,” Helms said.

Helms said extra law enforcement was on hand at both Geneva City and county schools first thing Tuesday morning. He said Geneva City schools were on a soft lockdown Tuesday because of the threatening clown images circulated online.

Helms discouraged anyone against pranks involving clowns. He also encouraged people not to believe everything they see on social media, particularly Facebook.

“Making a terrorist threat is a serious charge, and they’re getting charged. If you do this you’re going to get in trouble. If we catch you we’re going to arrest you,” Helms said. “You’re creating mass hysteria. They perpetuated a hoax, and they caused disruption of school. Number one, we’re going to protect our children. But we’re using valuable resources, when we could be doing other things than running down a hoax.”

The Enterprise Police Department arrested a 13-year-old Tuesday afternoon in connection with a similar clown prank targeting Enterprise City Schools. That juvenile was charged with making terrorist threats after he posted “Hey Dauphin I’m coming for you on Tuesday be prepared- Crazo Klown”.

The investigations into threatening clown posts online by Geneva County and Enterprise authorities became the fourth and fifth such investigations within the last week by law enforcement in the Wiregrass.

Troy Police Chief Randall Barr released two statements on Monday afternoon outlining their investigation into a live Facebook video involving two Charles Henderson High students dressed as clowns. The statement said along with identifying the teens in the video, police seized the clown masks used, and took down the Facebook accounts. Troy police said no threats were apparently made during the clown video. Troy police filed no charges in their investigation.

Daleville High and Windham Elementary schools were placed on soft lockdown Monday in response to threatening clown images posted online circulating through the Daleville community. Around 12 p.m. Monday the schools were evacuated in response to a bomb threat that was made. The schools were later cleared and found to be safe after the bomb squads from the Dothan Police Department and Fort Rucker were called in to investigate.

Because it is so nonsensical that it is difficult to understand, let me lay it out for you.

It feels like something is missing there, right? Like somewhere along the way we were going to read that some real crime happened, or that the behavior had people burning their homes down and moving to Singapore out of sheer terror. But there was no crime and the only people who think ‘joking about walking around dressed as a scary clown at night’ is terrorism or a crime are police.

So now they are hoping nobody stands in their way so they can ruin these boys’ lives forever.

Do you not see it yet? The police are insane. They are afraid of everything that exists and want to charge it with crimes or shoot it dead. They are like their own new kind of zombie who will not rest until they have killed all who are not one of them. That includes you. Yes, you. They have gone mad and if you do not begin to realize it and demand we abolish police right now then here is what this week will be remembered as – the week that The Patrolling Dead took the upper hand and began the fall of humanity.

Or it can be the week where we woke up, came to our senses and did the right thing – sending humanity on a path towards peace and prosperity.

I will probably not sleep very well tonight, as I can only imagine what the morning news will bring tomorrow.