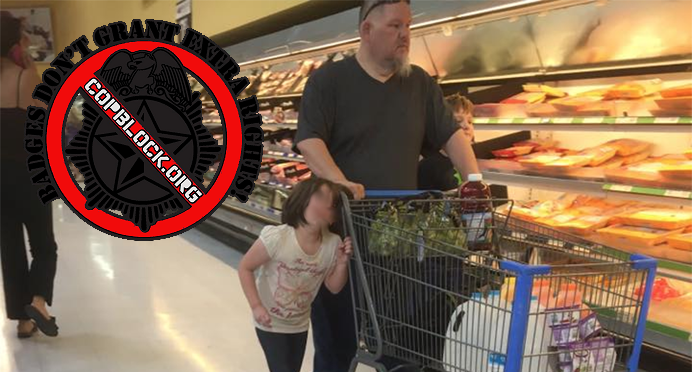 In a viral Facebook photo post showing a man violently pulling his daughters hair in a Wal Mart store, local police were immediately notified and investigated but refused to act, allowing the criminal child abuser to leave the scene.

In the original Facebook post Erika Burch (who took the photos and posted them) claims that the girl pleaded for her father to stop, while he mercilessly continued the abuse. When an attempt at intervention was made, the man dismissed her concerns, so she decided to call the police. When the police arrived they could find no physical evidence of abuse on the girl, and claimed it was the right of the man to discipline his children as he saw fit.

“Please stop, I promise I won’t
do it again. Please stop!”

After the post went viral on Facebook, and public outrage soared, the police have decided to do a more thorough investigation. So they claim.

As many commenters noted, if this was what the father was okay doing so casually in public, imagine what their home life must be like. Indeed. Now imagine the anger and shame of an abusive father who just got publicly called out. I imagine that things got much worse for that little girl when they got home, although I hope that I am wrong about that.

“Right now, this little girl is my business
and you need to let her hair go now!”

Police not only did nothing, they potentially made things worse.

And in another way, they make it far worse, because what should have happened is that this man should have gotten his ass publicly kicked by a concerned citizen or several of them. And the girl should have been given shelter until she could be placed with family with a restraining order against the father.

But such a beat down would be against the law, and soon those true everyday heroes would become a victim of the police. Police not only fail to provide justice, they prevent it. The monopoly on force endangers human lives.

I would also not be surprised to find out that the man was himself employed by law enforcement, since they are far more likely to abuse their own children than normal citizens.

Read more and see the rest of the pictures:
‘Please stop’: Young girl begs as unapologetic Texas dad drags her through Walmart by the hair