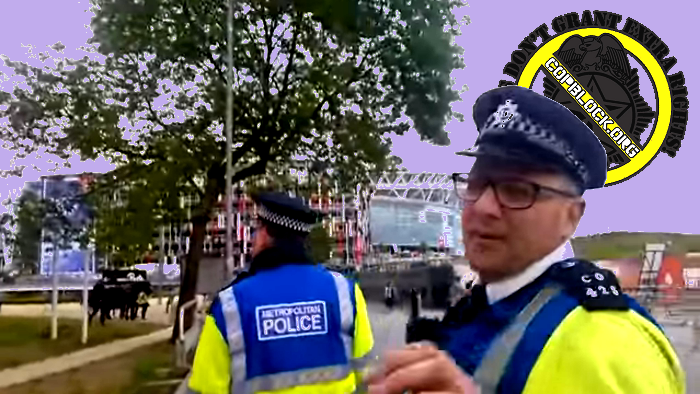 The following video was sent to us from Marcus Potter at our Submissions Page and details interactions he had with London Metropolitan Police in the United Kingdom.

Okay, so I do not want to downplay the horrors of police anywhere. No matter where they exist, their foundations are corrupt. Even the most well-behaved police in the world rely on theft and force to exist, so their good is outweighed by their basic premises.

Yet in many places around the world, police are not jumping out of their socks and shooting at anything that moves anywhere near them. And they generally have better manners. The officer who shoves Marcus in this video appears to be above average on the tyranny scale of British law enforcement, but even his heavy hand is far softer than what we are accustomed to in America.

On top of that, we Americans are far more abrasive and confrontational in general. I must admit I am not a huge fan of the machismo confrontational attitudes of some American police and liberty activists. The open carry, audit and coin-dumping videos annoy me because it is a citizen doing the same thing I hate police doing; which is going out of their way to fuck with someone. I can certainly appreciate using humor in police interactions, but using police interactions as a way of getting Lulz Points on your viral video just seems selfish, over-played and boring to me.

Of course Marcus is not using humor to interact with police, although he is laughing a lot for some reason. His approach is much closer to the auditors I just discussed. But being British, and in comparison to its American counterparts, there is something hilarious about it nonetheless. Just watch, you’ll see.

Marcus also contributed the following text to accompany his video:

I saw a Police riot van which was mostly filled with officers and approached it so I could ask officers “Is the driver using his mobile phone with the engine running?” to which they replied that it was but as the van was in park it was perfectly legal for him to use his phone.

I then saw some coppers up the street, walked around them and then began following from a reasonable distance. One of those officers, PC Paul Todd 425CO was not exactly impressed at my filming and turned around. He then said “Right that’s it. We’ve had enough. Come on, go away now.” before pushing me in the chest. PC Todd then walked away after receiving some looks from his colleagues which suggested that they were not exactly impressed with his behaviour.

I then approached the van load of officers I was talking to earlier and asked an officer who appeared to witness the whole thing, PC 782YR whether she got the guys collar number to which she replied “Who?” to which I replied that I was referring to “the guy who just pushed me” called Paul. I also explained that he was a Metropolitan Police officer and she then denied seeing anything happen. I thanked her for engaging with me and then left.