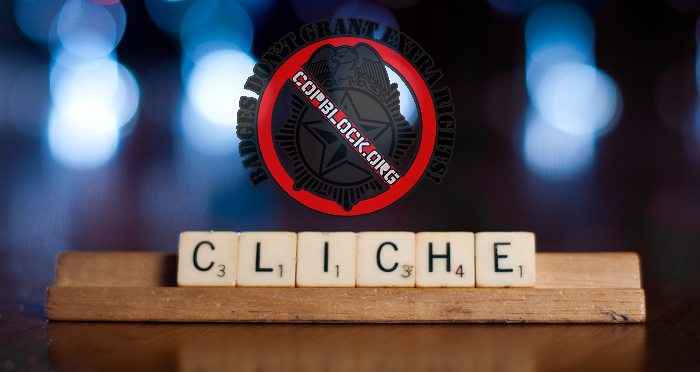 Okay macho liberty bros you’ve made your point. Now can we please move onto more productive pursuits and stop jockeying for face time and popularity?

Here at CopBlock.org we promote all kinds of different methods of exposing the police state, even though not all of us always like everything that happens and sometimes grow weary of the endless activist cliches. That’s just how it goes, we are a diverse disorganization. No one is forced to accept everything and no one is forced to read. Our services are secured and provided on a completely voluntary basis. Unlike police and the state.

Nonetheless, I kind of wish it would stop. The tough guy antagonism repeated endlessly through decades old activists tropes might get attention, but it doesn’t really make sense. In a movement that desires that individuals not get antagonized for the sake of something to do, maybe we should be doing the same.

Constitutional audits, open carry protests, paying fines in pennies – these were all once great ideas for publicly exposing the police state. But there has been no shortage of contributions to these actions. They have become stale cliches that offer nothing new to our message. And those that participate in them usually seem either intellectually and creatively stifled, or to be searching for internet wins.

You can please old dogs with old tricks, but you can’t change the world throwing bones everyone already knows the flavor of.

All you did was help validate it.

Being confrontational in the search for accountability just helps empower that tired narrative. Accountability is futile. If the best you have to add to our cause is to try to appeal to their system, then you are validating that system and making things worse. You are just banking on the weaknesses of outrage junkies and skeptical police supporters.

“I used to support Cop Block back when you were just against bad cops, but now you are a joke.”

These are the people the cliche antics appeal to. These are not people who want to see the police paradigm toppled. They do not want privatization or abolition or any of the other alternatives suggested here. They just want to be emotionally gratified by their rage while still depending on the police state.

By feeding them, we are starving any progress in the fight against the police state. This conservative activism, which repeats history rather than writes the future, simply traps people in a cycle of statist limbo; working against innovations that will make the monopoly on force obsolete.

These activists that appeal to outrage junkies are not creating change. They are creating cults of personality that give credence to the police state. They appeal only to tired traditions because they, like police supporters, are afraid to view a future they cannot understand. They cling to ancient documents and lulz remixes because their first goal is often not freedom and liberty, but to profit from those who still support the system I oppose.

So while I do not speak for all of Cop Block in saying this, neither do those robots of rebellion speak for me. Remember that.