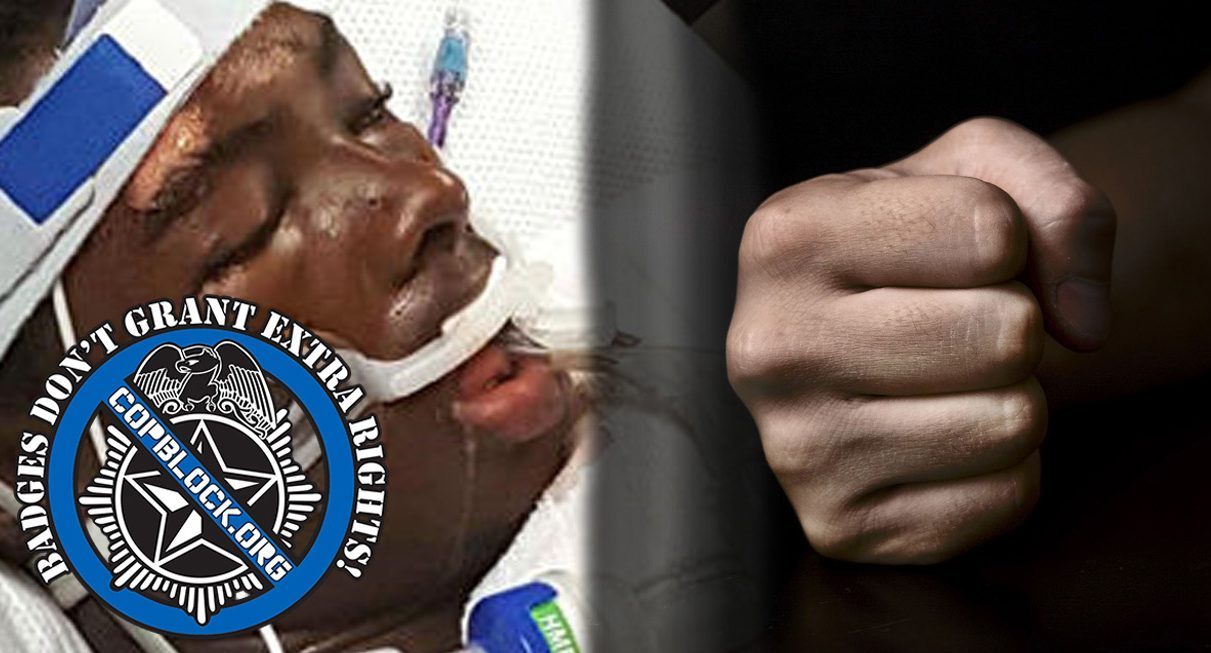 A 21-year-old man is dead after he was reportedly slugged in the face by a Baltimore police officer following a 911 call he made because he was feeling disoriented and needed an ambulance.

Tawon Boyd died on Wednesday when doctors couldn’t revive him after the encounter. An autopsy has not been completed yet but police said during their response to the call, Boyd was acting “confused and paranoid.”

According to the police report, Boyd asked officers to enter his house and told them that his girlfriend, Deona Styron, “got him intoxicated and [was] secretly recording him while someone else [was] in the home.”

Boyd wanted the officers to go into the house and find out who was in there, police said, but then began acting erratic and tried to enter two police cars. He also reportedly ran to a neighbor’s house and began banging on the door and shouting, “Help! Call the police!”

“It was obvious suspect Boyd was under the influence of a narcotic and/or suffering [REDACTED] and needed to be taken to the hospital for emergency evaluation,” the police report states.

Boyd is not described in the report as violent, but it says that he seemed to have scratched one officer’s neck, accidentally kicked another “while trying to stand,” and grabbed a third officer’s face with his hand slipping down to his badge and microphone.

After Boyd was loaded into the back of an ambulance, he reportedly had physical injuries. According to the report, the cop whose face he grabbed, identified as officer Bowman, “delivered two closed fist strikes to the suspect’s face with his right fist.”

“They really were supposed to be there to get him to the nearest healthcare facility,” Boyd family attorney, Latoya Francis-Williams said. “He [was] literally attacked. And by attacked, I mean the witness [Styron] is describing that he [was] struck many times and struck to the ground.”

“Officer Bowman is the one that when he arrived, really started wailing on Mr Boyd, meaning Mr Boyd was on the ground in a prone position and Bowman sat on him, almost straddled his back, and put his left arm under Boyd’s neck and pulled his head up in a choking fashion,” Francis-Williams added.

According to the police report, “officers were able to get [Boyd] under control by using body weight to keep him on the ground.” It says that “officer Bowman controlled Suspect Boyd’s head and arms by holding him down with his arms” while another officer held him down “by leaning on his buttocks/thigh area with my knees and using my arms.”

Boyd reportedly became so calm that Bowman “asked a medic to check the suspect for a pulse,” and “medics advised that the suspect did have a heartbeat prior to being transported.” Boyd was then taken to intensive care where he exhibited “swelling on the brain” and his kidneys failed before his heart stopped, according to Francis-Williams.

“They kept on grabbing on him and holding him down, and he started screaming, ‘Grandma, Grandma, they’re going to kill me,'” Boyd’s grandmother, Linda Burch said. “I think they killed him. By them being so many, and they tall and big, and he’s small. It didn’t take all them police just to try to hold him down.”

Baltimore police officials say that homicide detectives are looking into the incident, which is standard procedure in all police-involved deaths, and that an autopsy report could take as long as a month to complete.