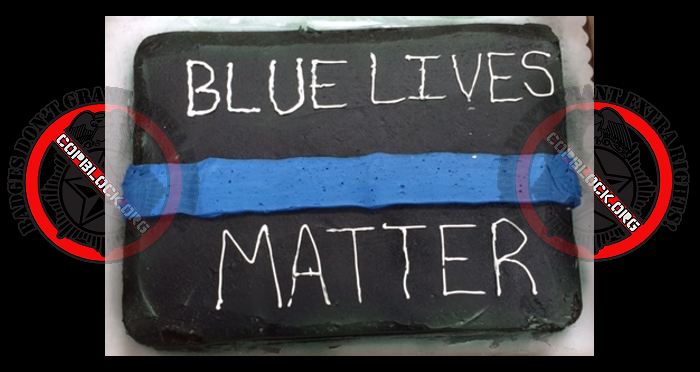 Workers at a Wal Mart in McDonough, Georgia refused a customers request to make a cake with the special police flag and “Blue Lives Matter”slogan because it they thought it was racist.

Let’s say that your cousin Tommy had cancer. To help him you create a local ‘Save Tommy!’ campaign to raise funds for his treatment. It becomes a very popular charity and you raise lots of money.

Then one day a guy releases a public statement which reads…

“We are all dying, one way or another. Why does everyone care so much about Tommy? Save Everyone!”

The ‘Save Tommy’ campaign was also instrumental in exposing a local factory that was intentionally leaking carcinogens into the local water supply, a likely explanation for Tommy’s cancer, and that of many other locals. In response to the protests against that company, they also release a statement…

“Terror Industries has recently taken a lot of heat for alleged carcinogenic contamination and are being unfairly blamed for the deaths of Tommy and other locals. Let us remind you that our company has provided this community with jobs and economic stability that has kept it afloat through the hardest of times. Save Terror Industries!’

Step off, we were talking about Tommy. Stop opportunistically trying to co-opt every dialogue in order to take advantage of it. Start your own thing. Make up your own slogans. And if you were killing Tommy’s, you have no right whatsoever to try to undermine his plight by making it your own.

While I would have preferred that the Wal Mart employees would have refused to make the cake simply on the grounds that they do not make cakes supporting murderous thugs, there is no way that they would have gotten away with so much truth. Whether they chose to deny the request because it was racist, which it certainly was (‘Save Terror Industries’ is decidedly anti-Tommy), or because that reasoning was more likely to be accepted – their denial of that request was far more rational and moral than the cake.

Fuck your hateful flag and your insipid co-opting of your victims pleas.

But most of all – FUCK YOUR BADGE!

Of course, after the hate cake requester made a stink about it in social media, Wal Mart formally apologized and made her the cake for free, as well as providing her with a fifty dollar gift card. She immediately complained that the cake was of poor quality, as though she expects Wal Mart should be the place to get top quality baked goods.

Before I forget, fuck you Wal Mart, for giving into the demands of Terror Industries and their supporters.

You can read the full story here, but be warned, it is from a conservative blog that favors that hate cake.