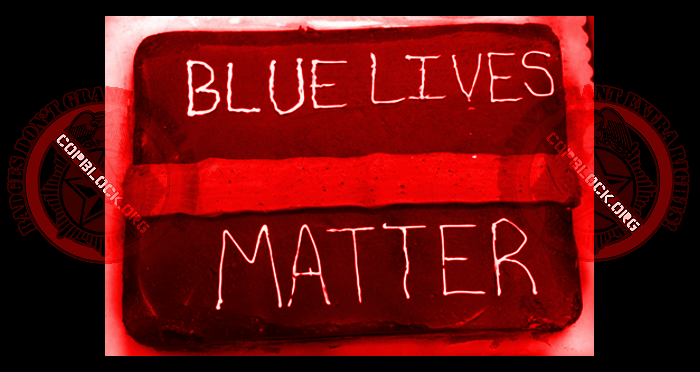 Both the woman who ordered the cake, and the McDonough, Georgia Wal Mart who eventually made it despite employee protests, have violated federal laws.

You know what is more delicious than cake? Irony. Sweet triple-frosted irony. As it turns out, when Wal Mart employees refused to make the cake on moral grounds, they were unknowingly acting in accordance with federal trademark laws.

This morning a long time friend of mine, who is a baker in a similar grocery chain outlet, cited copyright laws as a likely reason the Wal Mart had refused to make the cake. Since that was not the reason given, and since the cake was eventually made, I doubt that reasoning was in play. But while investigating claims on the thin blue line logo, I did find one.

The requested design, a black rectangle with a blue line through it, is a trademark protected image owned by Blue Line Productions. A message on their website shows gives documentation of ownership and contains the following statement from President Steve Bollinger:

Trademark law protects a trademark owner’s exclusive right to use a trademark when use of the markby another would be likely to cause consumer confusion as to the source or origin of goods.  To establish a violation of the Lanham Act for either a registered mark under 15 U.S.C. § 1114, or an unregistered mark under 15 U.S.C. § 1125(a), the plaintiff must demonstrate that (1) it has a valid and legally protectable mark; (2) it owns the mark; and (3) the defendant’s use of the mark to identify goods or services causes a likelihood of confusion.

Suffice it to say, the cake certainly violates the terms of trademark law. Since it is a punishable crime which may be enforced by law enforcement agencies, one wonders why police have not investigated the commission of the the crime by the woman, nor its commitment by Wal Mart. Where were the good cops when these criminals were committing crimes in their names?

I guess cops think they can have their criminal cake and eat it, too.

Meanwhile here at CopBlock.org all of our materials are registered under a Creative Commons license which allows anyone to reuse or reproduce any of our materials for any reason at any time. Unlike Blue Line Productions, we are not greedy shysters trying to squeeze every last cent out of the thuggish misery of the police state. You are welcome.

Thanks for the tip, Brian! (drums)