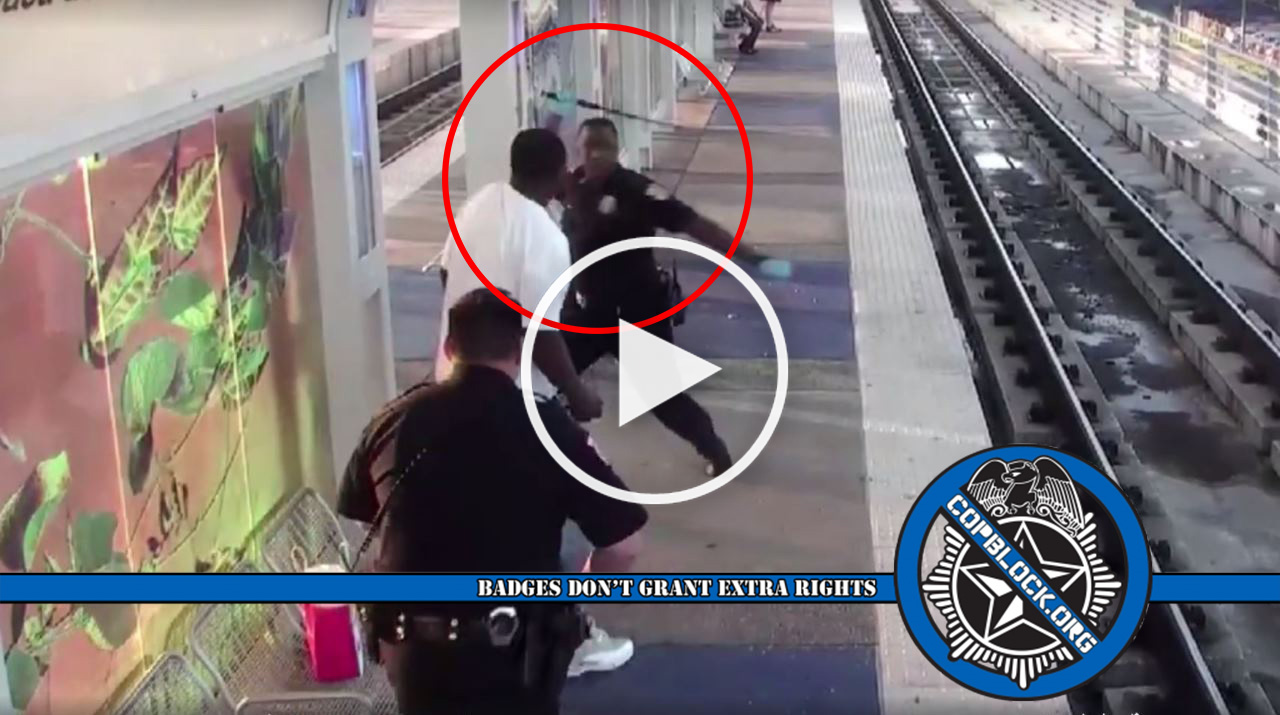 A Houston transit officer has resigned after surveillance video from a train station showed him viciously and repeatedly beating a man with a baton after he was found asleep.

Officials announced on Monday that Officer Jairus Warren quit his job following an internal review that recommended his dismissal for using excessive force against Darrell Giles in the September 15 incident.

Warren and another officer had found the reportedly homeless Giles slumped over in a seat. The surveillance footage from the train station shows Warren tap Giles on the leg with his foot in order to get his attention and attempt to wake him up.

The video doesn’t have audio but Warren can be seen presumably telling Giles to get up. Giles seems to respond that he didn’t appreciate the officer waking him up the way he did – and as a result – Warren kicks Giles in the leg again.

Giles then stands at attention and Warren extends a retractable baton and begins striking him in the face and upper body. Giles slumps back into the seat and Warren continues to beat him with the baton about the body and legs until he falls onto the ground writhing in pain.

The video shows Warren and the other officer attempt to flip Giles onto his stomach – and he is struck two more times with the baton. The officers then put their knees in Giles’ back and he is handcuffed and led away, barely able to stand.

In total, Giles was struck with the baton more than a dozen times. He was arrested on charges of trespassing and resisting arrest but the counts were later dropped and he was released from jail and taken to the hospital.

Metro police chief Vera Bumpers said the second officer involved in the beating, Daniel Reynosa, was suspended following the incident but was cleared of any wrongdoing and will now return to duty. He will be required to complete additional training however.

The officers reportedly had previous encounters with Giles the night before the incident that were also captured on video – and Bumpers said Giles was combative and non-cooperative, but maintained that the use of excessive force cannot be excused.

Prosecutors will review the case will determine whether criminal charges will be filed against Warren. Giles’ mother, Ossie Giles, said she was shocked when she learned about what occurred.

“When I seen him on the news, my blood pressure shot through the roof,” she said. “It still hurt[s] my heart every time I see it, that they beat my child like that.”