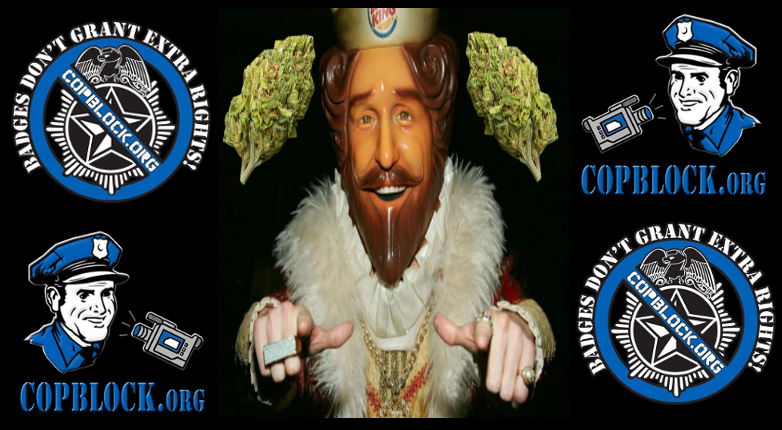 In the small Maryland town of Thurmont, police spent two months on an undercover operation that eventually thwarted a massive drug ring involving two twenty-something employees. At the conclusion of the big sting operation, cops were able to keep five grams of pot and two morphine pills off the streets of Thurmont.

Of course, in order to pull off this massive undertaking and get to the Burger Kingpin, somebody had to pick up a second job slinging burgers for two months. Fortunately, they had some fresh meat just out of the academy that they could use to find out who was giving customers a little extra lettuce with their burgers.

The operation began in August as Officer Nicole Fair was still adjusting to the department, having started July 1. Fair’s tenure coincided with complaints about drugs being sold out of the Burger King on North Church Street. Her supervisors quickly realized the opportunity to run an undercover operation, Chief Greg Eyler said.

“It is less common, because we live in a small, tight-knit community where people know one another. In this case, we had a new officer who wasn’t well-known in Thurmont at the time,” Eyler explained. “So we thought that we would put her in there in a covert operation.”Submitting a résumé that included some of her work history but excluded her law enforcement career, Fair was hired by the fast-food restaurant in early August and set out to get to the bottom of the rumors.

By Sept. 22, indictments were unsealed against two Burger King employees, 23-year-old Tommy Lee Miller and 28-year-old Jonathan Brook Moser, in Frederick County Circuit Court on the strength of Fair’s undercover work, which resulted in at least two drug purchases by the new officer.

“I was hired to help and protect the community of Thurmont, and that was what I was doing. You hear about all the drug problems we’re having here and elsewhere and, whether it’s marijuana or something else, we’re really feeling the effects of it,” Fair said of her role in the arrests. “To be able to do something to directly address that, especially being a new officer, was extremely rewarding.”

Police seized 5 grams of marijuana and two morphine pills during the operation, Eyler wrote in an email response to The Frederick News-Post’s questions Tuesday.

Possessing less than 10 grams of marijuana on its own is not enough to warrant more than a criminal citation under state law, but because the men sold marijuana to Fair, both were charged with distribution and possession with the intent to distribute marijuana, more serious offenses that carry jail time, Eyler said.

“It was worth doing the investigation because distribution is a felony and they were dealing at a restaurant, which is totally inappropriate,” the chief said of the undercover operation.

Before the investigating, the department did not know the quantity of drugs Miller and Moser had, Eyler said

No search warrants were filed after the indictments, Eyler said. While drugs were seized during the investigation, police did not have probable cause to search any other addresses, including the Burger King or either man’s home, he said.

Both the Frederick County State’s Attorney’s Office and Thurmont Mayor John Kinnaird were told that police were planning an undercover operation, but Burger King was not notified.

“Based upon the information we had, we felt that anonymity was necessary for the protection of the officer and the integrity of the operation. … Alerting management would have compromised the investigation,” State’s Attorney Charlie Smith said.

So, the biggest surprise about this story is obviously that she had to put in a resume to get a job at Burger King. That tells you a few things about the economy and job situation in Thurmont. But getting past that, it took her two months to find someone that would sell her an amount of pot that would only get you fined and (literally) a couple pills without even being able to drum up an excuse for a warrant to look for more.

That just tells you what horrible drug epidemic it was that Officer Fair (I’m seeing the irony) was “protecting the community of Thurmont from.” The reality is no doubt that she couldn’t find anyone running drug sales out of the Burger King, so she found a couple gullible guys willing to supply her with some of their personal stash. That, of course, was inflated into a felony “crime” for something that shouldn’t even be illegal in the first place.

It’s good though that Officer Fair got some valuable experience to fall back on though, if this whole being a cop and ruining people’s lives over victimless crimes thing doesn’t work out.