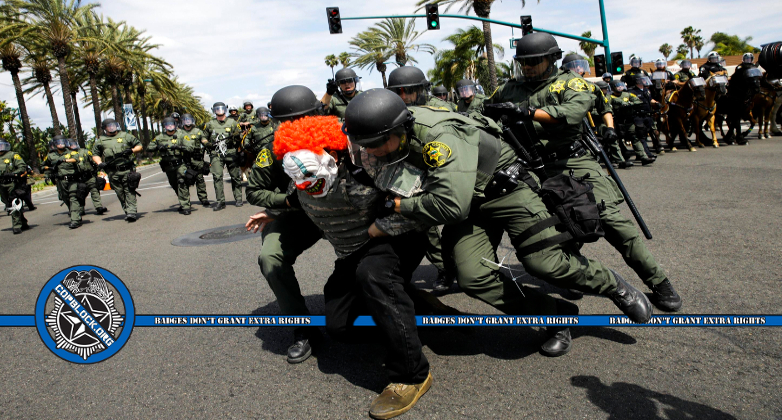 I’ve previously reported on the harrowing and expanding threat that clowns have begun to represent to this country and citizens throughout it. Fortunately, my warnings did not go unheeded and not long ago South Carolina Police Chief Ken Miller promised to get tough on clowns. In order to do so, he indicated he would begin enforcing a law that was already on the books against wearing masks in public. (technically clown makeup isn’t a mask, but you can’t engage in semantics at a time like this.)

Initially, this policy that effectively outlawed clowns seemed to have made some important headway. As fellow CopBlock Network contributor Joshua Hotchkin reported a couple weeks ago, four arrests were made across two states soon after. For a brief moment, the country was able to breathe a sigh of relief, believing that the Great Clown Invasion of 2016 had been thwarted. Predictably, that didn’t last long, though.

That was far from the end of it, as we all know now. Since those initial arrests there have been at least eight more of these painted tormentors have been hauled in on various charges across numerous states. More troubling, the sightings of menacing clowns have not stopped, but in fact have multiplied and spread to at least ten states nationwide.

Another very troubling detail to have emerged within the latest sightings is that the majority of these clowns are reported be driving vans. You might ask yourself what is so dangerous about that and, on the surface, it’s a reasonable question. However, anybody who has been to the circus knows that clowns can use their magical powers to fit at least a dozen of their cohorts into a really tiny car. Just imagine how many clowns are hiding out in something as big as a van. There might be hundreds in there just waiting to spring out and lay waste to your neighborhood. Hell, three or four of them vans would be all they need to overrun a small town.

Check out this report from the New York Times:

The reports to the police had one thing in common with the circus act involving an improbable number of clowns emerging from a small car.

Just let that sink in for a minute. What hope is there to stop such a relentless, determined group of pseudo humans bent on destroying society as we know it?

There are perilous times ahead for sure. An entire school in Reading, Ohio had to be locked down after a woman reported a clown related attack. One day prior in a nearby town, a young clown was arrested for making threats to school children. Fortunately, the Heroes in Blue protecting Colerain Township were able to nip that one in the bud before it reached full maturity.

Since they originally emerged from their lair in South Carolina, other clown sightings have been reported in Alabama, Georgia, Kentucky, Maryland, New Jersey, North Carolina, Pennsylvania, and even on the West Coast in California. Luckily, in Maryland a known and longstanding gang of clowns, who were brazen enough to flaunt themselves at public events, has been forced by the publicity to withdraw from such activities. We can score one for the good guys out there.

That’s obviously just a minor dent in their numbers, though. Earlier this week, several of the Clowns even released a Facebook Live video mocking their pursuers:

Sadly, before I conclude this latest update I even have to report that this scourge upon ‘Merica has very much hit home for me. Last night, KTNV News, the local ABC affiliate for Southern Nevada, reported that a clown had been trying to “friend” students from Chaparral, a Las Vegas high school.

This is dangerous on several levels. First, it’s near me and so that makes it important. Possibly even more troubling though, this means they are learning to use social media. Once these clowns start organizing on the internets, they’ll pretty much become unstoppable. We should all accept that this is probably just a matter of time, at this point.

Fortunately, ABC 7 in Denver is reporting that the FBI and Homeland Security have finally become involved. (The article also includes a handy timeline of the Clown Invasion.) Hopefully, this not a case of too little, too late already. Obviously, this is the (no-clown) human race’s best chance of surviving. “Help us Homeland Security, you’re our only hope!”