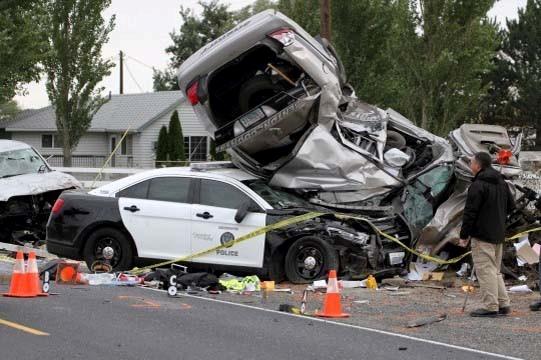 This story was circulating on Facebook and details how a cop crashed into a woman’s father as he was on the way to the hospital, to pick up his wife and their newborn child. To make things worse, one of the cop’s buddies showed up at the hospital to intimidate him while he was still in recovery from the trauma.

Does this type of behavior prove that police are responsible human beings willing to take responsibility for their actions, or is it more telling of a group of people who will do anything in order to avoid the repercussions of their behavior?

My dad was pulling out of the drive way to pick my mom and brand new baby brother up from the hospital when his car was hit by another vehicle going over 100 mph in a residential area. The entire front end of his car was ripped away and the engine was pushed back.

My family lived on top of a hill right next to an elementary school.

Needless to say my dad made it to the hospital that morning, just not to pick up his new born son and wife.

While my father was in the hospital in a complete daze a police officer came into his room to file a report. My father was not coherent, so my grandfather told the cop that he would give his statement after he had a lawyer and that the cop needed to leave the room. The cop threatened to arrest my grandfather for interfering with a police investigation etc., but eventually left when my father found the strength to tell him to get the fuck out.

My father was cited for the accident and had to hire an attorney and a team of engineers.

So here’s the scoop, the guy that hit my father was a cop and he was responding to a convenience store burglary. The cops were all in cahoots trying to place the blame on my father, the guy pulling out of his driveway to pick up his new baby and wife. They ended up citing him for failure to yield.

Here is what my dad’s team of engineers figured out—> there was over 365 feet of 4 wheels locked up skid marks prior to impact and over 100 feet after impact. The cop was driving over 100 mph in a residential area where he did not have a clear line of vision. He was responding to a call where a bum stole beer and a candy bar from a convenience store. He almost killed my father. Had this been any one else they would have been thrown in jail and responsible for all the damage, but since it was a cop my father was bullied and relentlessly pursued. His lawyer told him to plead no contest and the state would pay for the damage of the vehicle. That was it. To this day my father has terrible back pain.

My dad just thanks God that he wasn’t pulling into the driveway with my mom and brand new baby brother when the cop crushed his car.