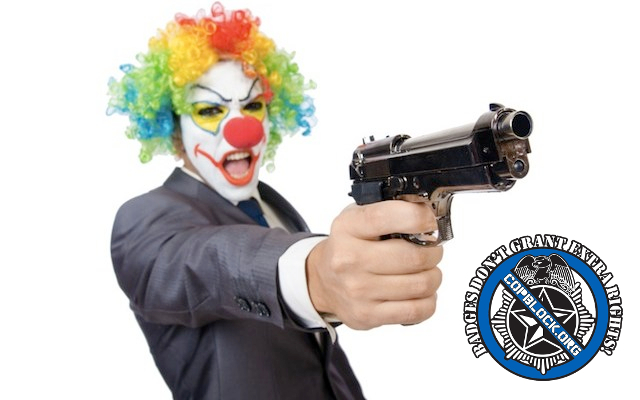 Just like the rest of the country, the DFW Metroplex has been riddled with clown sightings, and stories of mischief. For the most part, its just been a big hoax that has reached hysteria level. Being in Texas, that hysteria can escalate into a bigger fear….vigilante gun owners who think it’s OK to shoot people based on fear of fear itself.

We should hope for the police be a voice of reason, and calm the masses. Well, not always.

A Denton police officer encouraged her Facebook followers to take matters into their own hands:

“This clown crap is really getting on my nerves,” Officer Latrice Pettaway wrote on Facebook Monday night, according to screen shots sent to The Dallas Morning News.

“Please handle it,” Pettaway continued. “Pop a cap in the first clown you see. Someone needs to just hit one and the rest of these fools will learn.”

Is that the solution? We’ve seen many threats from individuals and alerts from cops, and that hasn’t slowed the craze. Dozens of news stories about creepy clowns appeared online Monday and Tuesday, indicating that the craze is far from over, especially with Halloween at the end of this month.

What does it really say about law enforcement when you have a cop talking this harshly about something that is ultimately just a mild nuisance? That she is so annoyed by it that she suggests someone should take it upon themselves to “pop a cap” in them thinking it will fix the problem?

It really shows how the militarization of law enforcement has distorted how they interpret problems, and what the best solution should be. Where even a nuisance that hasn’t really showed a real threat should receive a death penalty. No judge. No jury. No evidence of a crime being committed. Just, “see something, shoot something.”

They don’t look at things the way the rest of us do. If we see a clown, we might take a minute to see if it’s a legitimate concern, or if it’s just some kid playing in their new Halloween costume. Normal people don’t see a clown and automatically think “pop a cap in them.” At least, not until they are encouraged to do so by law enforcement…and it’s not like Texans need encouragement.

As citizens, our normal reaction is to call the police if we are concerned. However, are we really being responsible if we call the police when we see a clown? If the police look at even the most innocuous of trends as a threat that deserves to be met with a gun, where does that put us if they end up shooting an innocent kid?

To call this irresponsible is an understatement.