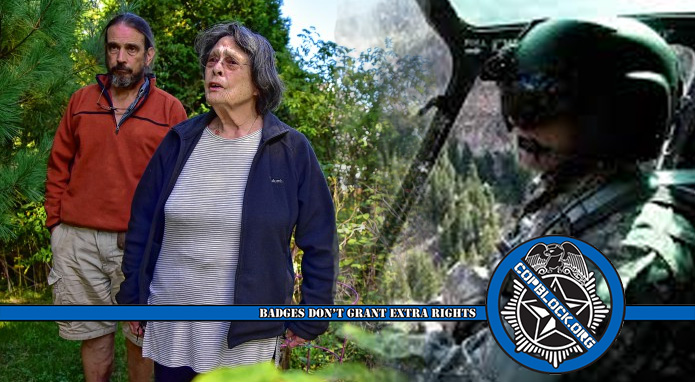 In a raid that used a military-style helicopter, the Massachusetts National Guard and State Police descended onto the property of an 81-year-old grandmother to seize a single marijuana plant she was growing for medicine.

According to reports, South Amherst resident Margaret Holcomb said she was growing the plant in her raspberry patch across the fence from any neighbors in order to treat her arthritis and glaucoma – and to help her sleep.

Holcomb wasn’t home at the time of the Sept. 21 raid, but her son, Tim Holcomb, was. He called what occurred “shocking” and “scary as hell” – and maintained that the action constituted illegal search and seizure and unlawful surveillance.

Holcomb was reportedly at his mother’s home catching lunch with his sister when the two of them heard and then saw the helicopter bearing down on the property. He said he saw two men crouching in the aircraft holding what he suspected was a thermal imager used to detect pot plants.

According to Holcomb, the helicopter was followed by several vehicles, which included a pickup truck with a bed filled with plants confiscated from other locations manned by several State troopers.

“He asked me if I knew there was a marijuana plant growing on the property,” Holcomb said of one of the troopers who flashed his badge. “I didn’t answer the question. I asked, ‘What are you doing here?’”

Holcomb said the trooper responded by saying, “We just want the illegal contraband” – and told him that as long as he did not assert his rights by demanding a warrant, or otherwise escalate the situation, no criminal charges would be filed.

The fight for marijuana legalization in Massachusetts has been an arduous one. The first medical marijuana dispensary was opened in the state last June, nearly three years after voters legalized therapeutic use of the drug.

Voters approved a ballot measure in 2012 allowing for the licensing of up to 35 dispensaries to sell marijuana to patients suffering from progressive and fatal conditions like HIV, multiple sclerosis and Parkinson’s disease.

Implementation of the law has all but halted however, with the state seemingly not wanting to issue licenses amid a mountain of regulations and outright refusals to businesses attempting to meet market demand for medical use of the drug.

In one such case, a judge ruled that a company was improperly denied licenses and ordered state regulators to allow the owners to move forward with plans to open dispensaries in Mashpee and Plymouth.

Massachusetts is even cracking down on so-called “marijuana caregivers” – an occupation sanctioned to fill medical demand by allowing licensed growers to sell the drug to no more than one patient until the dispensary industry blossoms – which by all estimations is taking a long time to occur due to regulatory impediments.

Margaret Holcomb does not have a medical card allowing her to grow or possess marijuana. Her son said he feels like the raids are being conducted so individuals can’t self-medicate, thus protecting the state monopolized medical marijuana market.

The raids are apparently being conducted on the state level on behest of the Attorney General’s Office and Governor without approval of local law enforcement agencies. Amherst Police Chief Scott Livingstone said he was completely unaware that they were being conducted.

A State Police spokesperson confirmed that troopers and National Guard troops conducted operations in the Amherst and Northampton area on Sept. 21, and said the plant seized at Margaret Holcomb’s home was one of 44 found on numerous properties that day.

“I’m prepared to take actions if I need to,” Margaret Holcomb said, maintaining that her civil rights were violated in the incident. “I don’t picture them out here and putting an 81-year-old woman in jail.”

Holcomb asserted that she is “not a huge social activist,” but stated that she is ready to stand up in the case. She said that if she is unable to get a proper medical marijuana card then she may attempt to grow an additional plant.