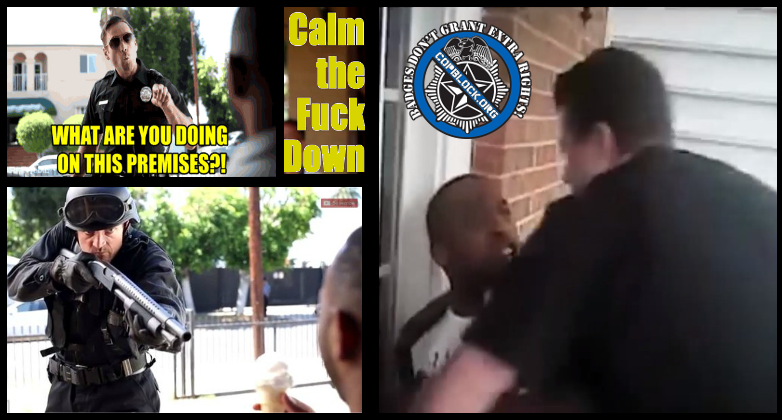 It’s been a while since it was easy to tell the difference between actual politics and an Onion article, but those vying to be deemed the Lesser of Two Evils aren’t alone in the distinction of having their behavior reach a level of ridiculousness that makes it hard to believe it doesn’t involve someone jumping out and telling their victims to smile while pointing out the locations of hidden cameras.

In August of 2014, the video satire site “Funny or Die” posted a video entitled “Cop vs. Black Guy” showing an outrageously ridiculous scenario that started out with a black man innocently sitting on his own front porch eating ice cream. Soon a cop appears from out of nowhere and starts accusing him of stuff and barking out insane commands, all while the innocent, non-threatening man tries in vain to explain that he’s just sitting on his own porch eating ice cream.

On EURweb.com it was described this way (links added):

*As the country continues to debate policing disparities in black neighborhoods in the wake of Ferguson, the satirical website Funny or Die has come out with its take.

In “Cop v. Black Guy,” an unarmed black man is eating vanilla ice cream on the front stoop of his own home when a white police officer confronts him and all kinds of hell breaks loose.

Written by “Key And Peele” veterans Colton Dunn and Phil Augusta Jackson, the situation spirals out of control, with the officer’s uniform going from his regular getup, to SWAT, to grass camouflage, to Stormtrooper before he realizes he needs to “calm the f*** down.”

Almost two years later, in June of this year, that video has come to life in a bad and very unfunny way. While doing nothing but sitting on the porch of the house where he lives with his mother, Dejuan Yourse was first harassed, then assaulted and arrested by a pair of Greensboro, North Carolina police officers.

Yourse willingly and peacefully gave Officers Travis Cole and C.N. Jackson his ID, which had that address listed on it, called his mother on the phone, and even offered to introduce them to some of his neighbors in order to confirm he lived there. In spite of that, Ofc. Cole, who at one point suggested that Yourse should pronounce his name a different way, attacked him when he called a friend and asked him to come over and vouch for him.

Although the excuse used was that the friend he called was possibly part of an elaborate scheme to ambush the two police officers, it actually seems much more likely that Cole was offended by the fact that Yourse (very correctly) stated to that friend that he was being harassed by him and Ofc. Jackson. In the end, Yourse was tackled to the ground, punched at least twice, handcuffed, kidnapped, and forced into a police car all because he had the audacity to sit quietly on his own porch, which was located somewhere the cops decided he didn’t belong.

Of course, the videos aren’t exactly the same. No ice cream was harmed while Officer Cole beat and kidnapped a very innocent man and there’s no wardrobe changes involved, either. However, the biggest difference between the two videos is that the real police have yet to (and likely will never) figure out that they should “calm the fuck down.”

In fact, cops have given every indication that they intend to respond to the negative reactions they have received to their violent, out of control, and racist behavior by doubling down on the Police State.