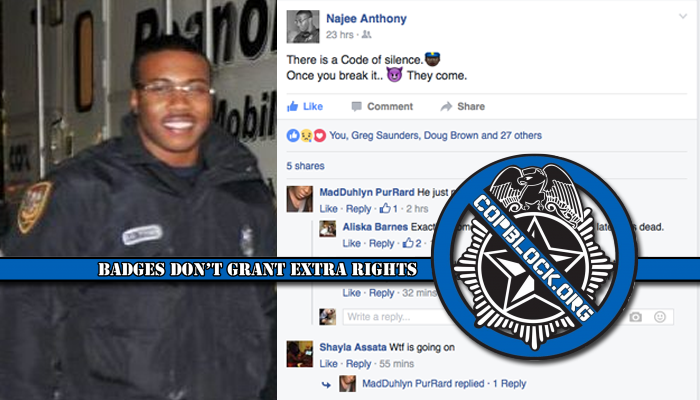 Najee Tynes, a 29 year old married father and Airforce veteran, with just under five years of service as an officer with the Roanoke Police Department, was found dead of a gunshot wound in a bathroom at the police station on the evening of July 27, 2016.

The story seemed peculiar at the time, and the scant details that have come afterwards are even more so. According to reports, Tynes had asked for a new bulletproof vest before allegedly going into the men’s bathroom and killing himself. And, according to a screenshot taken from Tynes’ Facebook account, he’d posted an ominous status update a mere four hours before his death.

The same night of Tynes’ death, the medical examiner’s office where his body was taken was evacuated for a suspicious package that turned out to be a wad of duct tape on the dead man’s ballistics vest. The local media in Virginia have apparently accepted the official suicide story as fact without question. Police officer deaths typically get a lot of coverage, however, the reports on Tynes were scant and focused mostly on the issue of suicide in law enforcement, rather than Tynes himself or the circumstances of his death.

A GoFundMe for Tynes’ funeral expenses collected merely $1,915, far short of the $11,000 it sought to raise. That’s an especially paltry amount considering how law enforcement officers are known to famously rally around their fallen and injured brothers. It’s also odd that there are no grieving comments from any of Tynes’ 300+ fellow officers on the department’s official Facebook page, especially considering the public outpouring of grief over Detective David Abbot, a child molester with the Manassas City Police Department who killed himself when officers from another department attempted to serve an arrest warrant on him.

There are however, many comments from Tynes’ friends disputing that this was a suicide.

Curiously, there was no follow up report stating his death had officially been ruled a suicide by the medical examiner. There is not even a report stating where Tynes’ injuries were on his body.

An investigation into Whaley’s claims was conducted, however, the Virginian-Pilot reports that the “medical examiner’s internal probe on wrongdoing allegations overlooked key issues.”

A subsequent review by the National Association of Medical Examiners found “potentially serious shortcomings in how long it takes the Tidewater, Central and Western offices to complete autopsy reports. None of them met the organization’s standard of finishing 90 percent of the reports within 90 days. It also revealed that the Western office did not meet the same standard for finishing its toxicology exams.”

The Western office is the district office in Roanoke that performed the autopsy on Tynes.

The news reports also fail to mention whether there were any cameras in the Roanoke police station. Obviously, there wouldn’t have been any in the restroom, but cameras in the hallway outside would have ostensibly shown whether anyone was in there with him at the time of his death.

In a statement released the day after Tynes’ death, the Roanoke Police Department said “an internal review of the circumstances was being conducted.”

As is typical with officer-involved deaths, the findings of that review, the nature of any complaint Najee Tynes filed internally, and the actual circumstances of his death will likely only surface as the result of a lawsuit.

If Officer Tynes was murdered for speaking out against some issue within the department, it’s not likely any other whistleblowers will be coming forward to tell the truth.