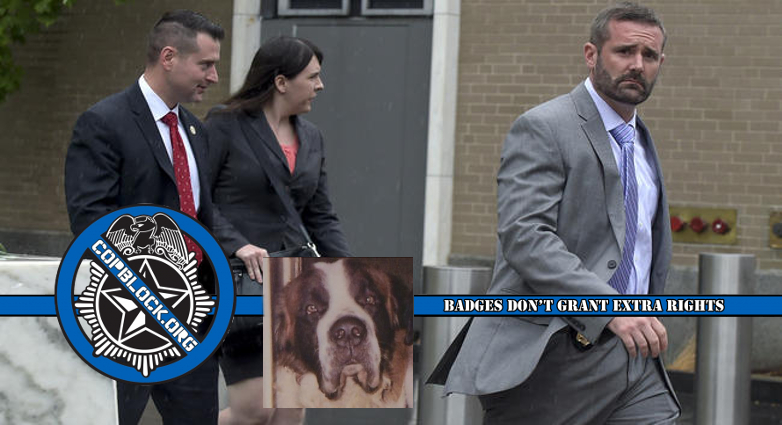 Last week, a federal jury ruled in favor of a father and daughter whose dog was shot by Hartford police during an illegal search of their property and awarded them $202,000. That award included $32,000 in punitive damages, which the two officers involved are personally responsible for splitting. As a result of that, the judge in the case placed liens on both officers’ houses to ensure they pay.

In addition, the lawyer for the dog’s owners, Glen and “K” Harris, stated that he intends to pursue as much as $640,000 in additional legal fees against the city. The case dragged on for ten years after the incident in which Sgt. Johnmichael O’Hare and Sgt. Anthony Pia shot the St. Bernard belonging to the Harris family while in the process of conducting a search in an attempt to find guns a gang affiliated informant had claimed were in their yard. No guns were found and they had not gotten a warrant for the search.

Via the Hartford Courant:

The case provided a stark look back at a time when the city was threatened with being overwhelmed by a spike in violence caused by warring drug gangs on the north side. The police department had created a new unit to defuse the problem, and officers were under pressure to find and seize illegal caches of weapons.

On Dec. 20, 2006, the gun crackdown ended up at Harris’ home at 297 Enfield St. That morning, O’Hare had been involved in a high-speed pursuit of a suspected stolen car that culminated in a frantic foot chase, over fences and across backyards, in pursuit of the driver.

O’Hare caught the driver, but not before being injured in the chase. He was ordered by a supervisor to report to a hospital for treatment. En route to the hospital, (defense lawyer Thomas) Gerarde said O’Hare and Pia were diverted to Harris’ home.

Another officer had just arrested a gang member who was found to possess dozens of bags of heroin. The gang member wanted to make a deal. If the police helped him get a break with the prosecutors, he would direct them to two guns that he said were hidden in an abandoned car in Harris’ fenced-in property.

Gerarde said O’Hare and Pia raced to 297 Enfield. They walked inside the fence, found no abandoned car and prepared to leave. He said they did not know that, on the other side of the house, Harris’ daughter, identified in court as K, had just returned home from school and had let one of her two St. Bernards out the back door.

K testified that the dog, named Seven and her favorite, suddenly looked up and tore away toward the front of the house.

K, in the meantime, said she was running toward the front yard on the other side of the house when she heard the two shots. When she got there, she testified that she saw the dog lying on its side and and yelled, “No. Don’t shoot.”

She said O’Hare shot the dog a third time, in the head, then turned to her and said, “I’m sorry, Miss, your dog is not going to make it.”

In the original 2008 trial, a jury ruled against the Harris’ after the judge ruled that no warrant was necessary. However, they appealed the case and won with the verdict being thrown out and a new trial ordered. The jury ruled in their favor this time in large part because the search was considered illegal absent a warrant.

Lawyers for the City of Hartford had stated in court that they will not be paying the remainder of the judgement because the city isn’t required to indemnify police officers implicated in illegal searches. It’s not clear if that means the city will try to force the officers to pay the entire amount and/or any future judgements. Some legal experts have stated that this was simply a bluff by the city in hopes of reducing any damages awarded after it became obvious they would lose.