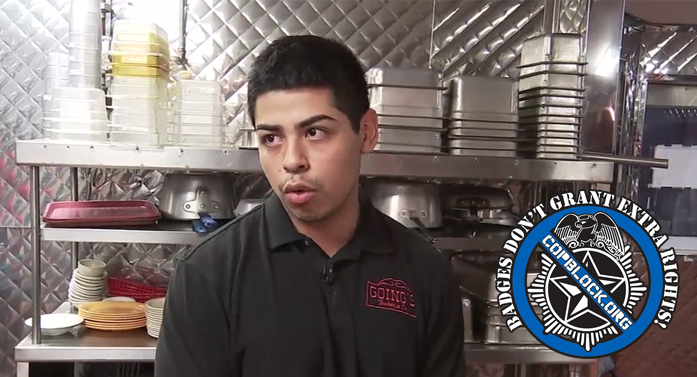 An employee at Going’s BBQ in Houston is unemployed after he blasted N.W.A.’s “Fuck The Police” on the stereo while sheriff’s deputies were dining.

Deputy Shane Cates posted about the incident on Facebook that had occurred a few days ago at Going’s Barbecue & Steak Co. in Crosby.

“I was completely shocked and thought surely no one was doing that as a dig on cops,” Cates wrote in the post.

“The guy washing dishes was singing the song and pointing out towards the eating area,” Cates wrote. “He turned and noticed me standing there and started laughing.”

Monday, Cates said he talked with the owner who was non-apologetic about the incident. When Cates told the owner he would never eat there again, Cates said the owner didn’t seem to care about losing his business.

Rigo Berto Ruiz, the co-owner of the restaurant chain, confirmed the incident did happen at the restaurant. The dishwasher had purposely played the song while the restaurant manager served officers their food.

The dishwasher has since been fired.

As for the resulting discussion with the manager, Ruiz said there appeared to have been some miscommunication between the two, blaming what appears to be a language barrier. Cates has apparently known the manager for years, and that Cates is a regular customer.

“They always played jokes on each other,” Berto Ruiz said. “He thought he was joking.”

The restaurant chain, through its individual Facebook fan pages, have issued a statement and apologized for the incident. They will be offering police officers to a free meal (sic) sometime in the future.