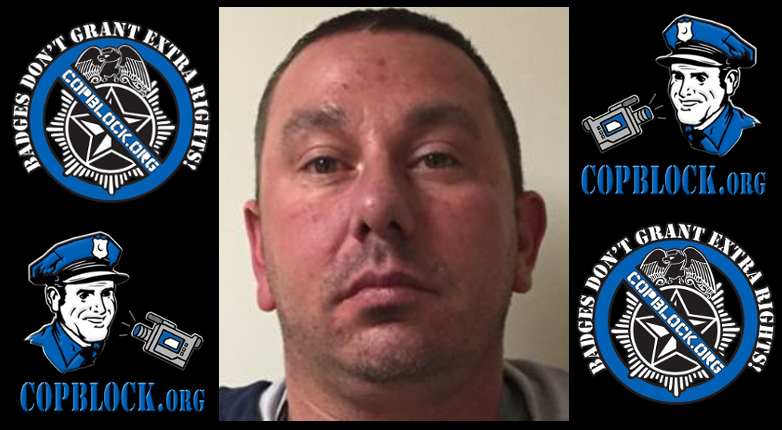 Nottingham Police Officer Chris Gilroy, who made news when he fraudulently posed as a teenage girl and attempted to lure then-state-representative Kyle Tasker for sex, has himself been arrested. Looks like Gilroy may have his own vices – he crashed his truck yesterday and was busted by state police for Driving While Intoxicated, according to the Union Leader:

Gilroy was traveling northbound on I-95 in a silver 2006 Toyota Tacoma pickup when it appears he attempted to take the Exit 2 off-ramp and lost control. His vehicle drove over the cement median and struck the Exit 2 off-ramp sign, state police said. After crossing the cement median, Gilroy drove across the off-ramp and struck the guardrail on the east side of the ramp, state police said.

His vehicle then continued northbound on the ramp for a short distance before driving onto the curb and striking the guardrail a second time head-on, according to police.

Gilroy played a major role in the investigation that led to Tasker being charged with multiple victimless crimes after police raided his home and allegedly found cannabis, psychedelic mushrooms, and MDMA. Of course, Gilroy’s vice in this case is legal, although according to a study published in the Lancet by the former chief drug adviser to the British government, Professor David Nutt, alcohol is the most dangerous drug available.

It’s not uncommon for the very same men and women who enforce the insane war on drugs to be users and addicts of the legal, hardest drug, alcohol. Of course, the hypocritical Gilroy will likely be facing a slap on the hand over this while Tasker is facing 13 felony charges that could result in anywhere from 60-120 years in prison and up to 1.5 million in fines.

You can get more news from NH Cop Blockers over at Free Keene, the original source for this article.

If you enjoy my posts, please sign up for a free account at Steemit, follow my posts there, and vote them up. If you do that, I’ll actually get paid in cryptocurrency for your vote-ups, thank you!