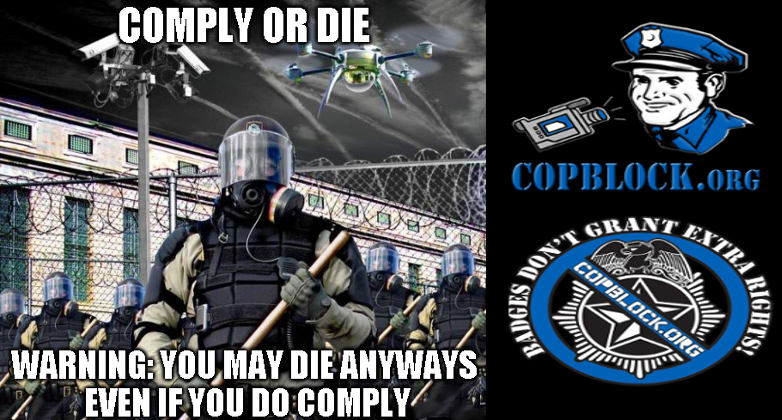 The following post was written by John W. Whitehead and was originally published at the Rutherford Institute under the title, “All the Ways You Can Comply and Still Die During An Encounter with Police.”

As the name implies, it discusses some of the many outrageous excuses the police have used to justify killing unarmed and oftentimes completely innocent people. Furthermore, the favorite rationalization used by police apologists to absolve murderous cops from responsibility for their actions and instead place blame on the victim is the tired (and fairly psychotic) old “comply or die” song and dance. However, as can plainly be seen below, many of these examples involve people who were actually not resisting in any way.

“Police are specialists in violence. They are armed, trained, and authorized to use force. With varying degrees of subtlety, this colors their every action. Like the possibility of arrest, the threat of violence is implicit in every police encounter. Violence, as well as the law, is what they represent.”—Author Kristian Williams

How do you protect yourself from flying fists, choking hands, disabling electrified darts and killing bullets?

How do you defend yourself against individuals who have been indoctrinated into believing that they are superior to you, that their word is law, and that they have the power to take your life?

Most of all, how can you maintain the illusion of freedom when daily, Americans are being shot, stripped, searched, choked, beaten and tasered by police for little more than daring to frown, smile, question, challenge an order or just exist?

The short answer: you can’t.

Now for the long answer, which is far more complicated but still leaves us feeling hopeless, helpless and vulnerable to the fears, moods and misguided training of every cop on the beat.

If you ask police and their enablers what Americans should do to stay alive during encounters with law enforcement, they will tell you to comply (or die).

It doesn’t matter where you live—big city or small town—it’s the same scenario being played out over and over again in which Americans are being brainwashed into believing that anyone who wears a government uniform—soldier, police officer, prison guard—must be obeyed without question, while government agents, hyped up on their own authority and the power of their uniform, ride roughshod over the rights of the citizenry.

For example, a local law enforcement agency in Virginia has started handing out a guide—developed in cooperation with a group of African American pastors—on how to interact with police. The purpose of this government resource, according to the police, is to make sure citizens feel “comfortable” and know what to do when interacting with police in order to “promote public safety and respectful interaction.”

Curiously, nowhere in the “Guide to Interacting with Police” is there any mention of the Constitution, or the rights of the citizenry, other than the right to remain silent.

In fact, the primary point stressed throughout the bilingual guide aimed at “building trust and cooperation,” is that citizens should comply, cooperate, obey, not resist, not argue, not make threatening gestures or statements, avoid sudden movements, and submit to a search of their person and belongings.

The problem, of course, is what to do when compliance is not enough.

I’m not talking about the number of individuals—especially young people—who are being shot and killed by police for having a look-alike gun in their possession, such as a BB gun. I’m not even talking about people who have been shot for brandishing weapons at police, such as scissors.

I’m talking about the growing numbers of unarmed people are who being shot and killed for just standing a certain way, or moving a certain way, or holding something—anything—that police could misinterpret to be a gun, or igniting some trigger-centric fear in a police officer’s mind that has nothing to do with an actual threat to their safety.

Killed for standing in a “shooting stance.” In California, police opened fire on and killed a mentally challenged—unarmed—black man within minutes of arriving on the scene, allegedly because he removed a vape smoking device from his pocket and took a “shooting stance.”

Killed for holding a cell phone. Police in Arizona shot a man who was running away from U.S. Marshals after he refused to drop an object that turned out to be a cellphone. (This actually happened in Las Vegas and the cell phone was in Keith Childress’ pocket when two LVMPD officers shot him. – Editor)

Killed for behaving oddly and holding a baseball bat. Responding to a domestic disturbance call, Chicago police shot and killed 19-year-old college student Quintonio LeGrier who had reportedly been experiencing mental health problems and was carrying a baseball bat around the apartment where he and his father lived.

Killed for opening the front door. Bettie Jones, who lived on the floor below LeGrier, was also fatally shot—this time, accidentally—when she attempted to open the front door for police.

Killed for being a child in a car pursued by police. Jeremy David Mardis, six years old and autistic, died after being shot multiple times by Louisiana police in the head and torso. Police opened fire on the car—driven by Jeremy’s father, Chris Few, who was also shot—and then allegedly lied, claiming that they were attempting to deliver an outstanding warrant, that Few resisted arrest, that he shot at police (no gun was found), and that he tried to ram his car into a police cruiser. Body camera footage refuted the police’s claims.

Killed for attacking police with a metal spoon. In Alabama, police shot and killed a 50-year-old man who reportedly charged a police officer while holding “a large metal spoon in a threatening manner.”

Killed for running in an aggressive manner holding a tree branch. Georgia police shot and killed a 47-year-old man wearing only shorts and tennis shoes who, when first encountered, was sitting in the woods against a tree, only to start running towards police holding a stick in an “aggressive manner.”

Killed for crawling around naked. Atlanta police shot and killed an unarmed man who was reported to have been “acting deranged, knocking on doors, crawling around on the ground naked.” Police fired two shots at the man after he reportedly starting running towards them.

Killed for hunching over in a defensive posture. Responding to a domestic trouble call, multiple officers with the Baltimore County police forced their way inside a home where, fearing for their safety and the safety of others,” three officers opened fire on an unarmed 41-year-old man who was hunched over in a defensive posture. The man was killed in front of his two young daughters and their mother.

Killed for wearing dark pants and a basketball jersey. Donnell Thompson, a mentally disabled 27-year-old described as gentle and shy, was shot and killed after police—searching for a carjacking suspect reportedly wearing similar clothing—encountered him lying motionless in a neighborhood yard. Police “only” opened fire with an M4 rifle after Thompson first failed to respond to their flash bang grenades and then started running after being hit by foam bullets.

Killed for telling police you lawfully own a firearm and have a conceal-and-carry permit. Philando Castile was shot and killed during a routine traffic stop allegedly over a broken tail light. As he was reaching for his license and registration, Castile explained to police that he had a  conceal-and-carry permit. That’s all it took for police to shoot Castile four times in the presence of his girlfriend and her 4-year-old daughter.

Killed for driving while deaf. In North Carolina, a state trooper shot and killed 29-year-old Daniel K. Harris—who was deaf—after Harris initially failed to pull over during a traffic stop.

Killed for being homeless. Los Angeles police shot an unarmed homeless man after he failed to stop riding his bicycle and then proceeded to run from police.

Killed for being old and brandishing a shoehorn. John Wrana, a 95-year-old World War II veteran, lived in an assisted living center, used a walker to get around, and was shot and killed by police who mistook the shoehorn in his hand for a 2-foot-long machete and fired multiple beanbag rounds from a shotgun at close range.

Killed for having your car break down on the road. Terence Crutcher, unarmed and black, was shot and killed by Oklahoma police after his car broke down on the side of the road. Crutcher was shot in the back while walking towards his car with his hands up.

Shot seven times for peeing outdoors. Eighteen-year-old Keivon Young was shot seven times by police from behind while urinating outdoors. Young was just zipping up his pants when he heard a commotion behind him and then found himself struck by a hail of bullets from two undercover cops. Allegedly officers mistook Young—5’4,” 135 lbs., and guilty of nothing more than taking a leak outdoors—for a 6’ tall, 200 lb. murder suspect whom they later apprehended. Young was charged with felony resisting arrest and two counts of assaulting a peace officer.

Now you can make all kinds of excuses to justify these shootings, and in fact that’s exactly what you’ll hear from politicians, police unions, law enforcement officials and individuals who are more than happy to march in lockstep with the police. However, to suggest that a good citizen is a compliant citizen and that obedience will save us from the police state is not only recklessly irresponsible, but it is also deluded and out of touch with reality, because in the American police state, compliance is no longer enough.

Frankly, as these incidents make clear, the only truly compliant, submissive and obedient citizen in a police state is a dead one.

If you’re starting to feel somewhat overwhelmed, intimidated and fearful for your life and your property, you should be.

As I point out in my book Battlefield America: The War on the American People, “we the people” are now at the mercy of law enforcement officers who have almost absolute discretion to decide who is a threat, what constitutes resistance, and how harshly they can deal with the citizens they were appointed to “serve and protect.”

Sad, isn’t it, how quickly we have gone from a nation of laws—where the least among us had just as much right to be treated with dignity and respect as the next person (in principle, at least)—to a nation of law enforcers (revenue collectors with weapons) who treat us all like suspects and criminals?