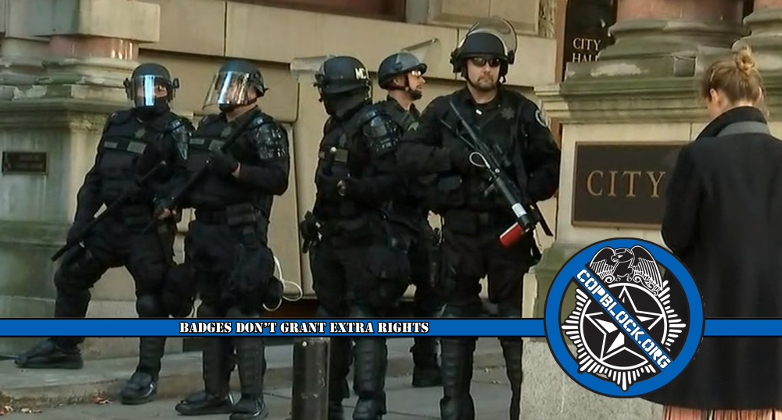 Protestors attending a Portland City Council vote that ended with the approval of a new contract for police were pepper sprayed by cops in riot gear. After the vote, the crowd became vocal in opposition to the contract, which gives police a raise and has been criticized as a  backroom deal between the police union and the city that the citizens of Portland have been given no opportunity for involvement in.

Ten of the protestors were also arrested when the police began forcibly removing everyone from City Hall and during continuing protests on the street outside. (See Videos Below)

Via KPTV.com, the Fox affiliate in Portland:

Officials announced that City Hall would be closed at 12:30 p.m. with all non-employees asked to leave the building. Protesters continued to stand their ground leading to a confrontation with police.

“Clearly they knew it was closed, very clearly they didn’t want to leave and there were people agitating officers inside,” said PPB Sergeant Pete Simpson.

The Portland Police Bureau reported that “projectiles” were thrown at officers and pepper spray was deployed by police.

“There is well documented video of an officer shoving a man after he approaches and charges at an officer, some one throws an object and the officers responded and shut the door,” said Sgt. Pete Simpson.

Protesters were seen pouring milk over their eyes to try and reduce the effects of the pepper spray, while officers in riot gear stood in front of City Hall.

As the afternoon went on, protesters blocked 5th Avenue near City Hall, causing numerous TriMet delays. By 2:20 p.m., police moved in and told the protesters to leave the roadway. The group appeared to initially comply and moved to the sidewalk, however several people were taken into custody.

After police left the scene, numerous protesters again poured into the street and blocked TriMet buses. Officers then returned again to keep the crowd on the sidewalk.

Prior to being forced out, some protesters had put up tents inside the City Hall. Others had put up banners and blocked traffic on 5th Avenue outside the building. Not long after the vote, police began violently pushing them outside and spraying pepper spray into the crowd.

Police are preventing protesters from walking onto 5th Ave in Portland next to City Hall. Rush hour commute has begun pic.twitter.com/4kMPCFeHJJ

Protesters responding: “We own this building.” “Who’s door? Our door.” @fox12oregon pic.twitter.com/laWzCc6Lxx