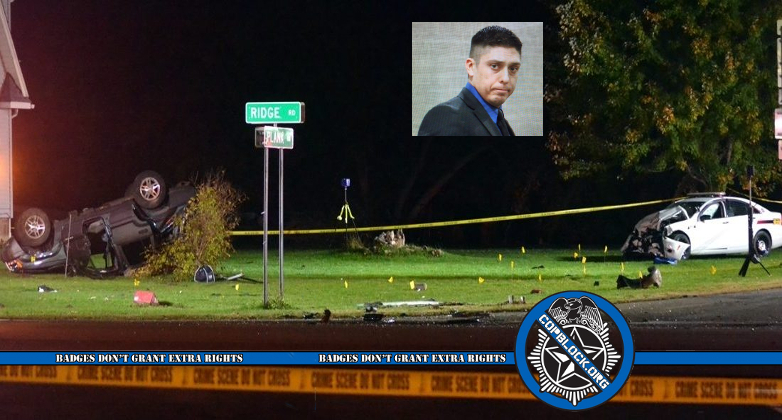 Niagara County Deputy James H. Bissell III was sentenced to a small fine after agreeing to a plea deal for an on-duty accident last year, in spite of the fact that he seriously injured a woman and killed her husband in that accident. In exchange for pleading guilty to three traffic infractions, the charge of reckless driving he had been facing was dropped.

Via the Buffalo News:

James H. Bissell III, 31, who had been a deputy for only 39 days when the crash occurred, was fined a total of $501 by Cambria Town Justice Amel S. Jowdy Jr. after Bissell admitted to imprudent speed, failure to yield the right of way and running a stop sign.

Jowdy Jr. imposed a $75 fine and a $92 state surcharge for each count.

Niagara County taxpayers could be liable for much more than that when a civil suit by the victim’s widow is either settled or tried.

“As long as he pleads to a violation of the Vehicle and Traffic Law, that cements the county’s liability. It becomes an admission of liability,” said Terrence M. Connors, attorney for Mary A. Annalora of Newfane, the victim’s widow.

Her husband, Glenn T. Annalora, 61, died from injuries suffered when Bissell’s patrol car smashed into the driver’s side of the Jeep at Ridge and North Ridge roads in Cambria shortly after 7 p.m. Oct. 22.

Mary Annalora, 58, who was a passenger in the Jeep, suffered multiple injuries, including fractured ribs and vertebrae, according to her lawsuit against the county.

I’m sure someone not wearing a Magic Suit would get off with a few minor traffic tickets after killing someone. And the bonus is that taxpayers get to pay for the million dollar lawsuit that will be getting settled soon with the victim that survived. To be fair though, his wrist is gonna sting for a minute and it’ll probably be a month or two before he gets hired by another police department.

As you can see in the video below, Niagara County Sheriff James Voutour also sent Thoughts and Prayers.