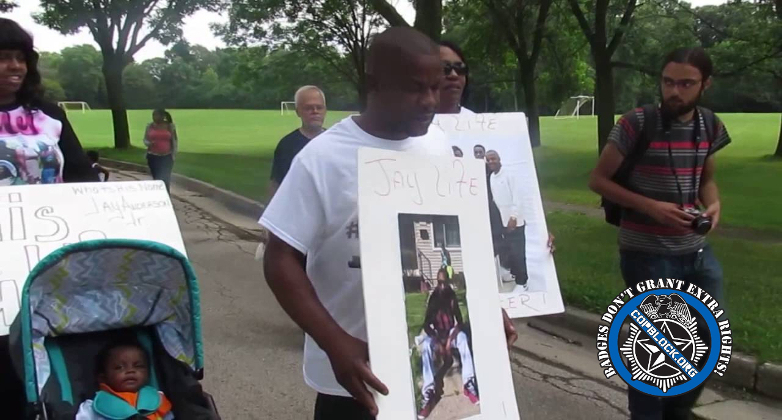 As Wauwatosa Wisconsin marks three months since its police department killed a man sleeping in his car, residents gather calling for answers. A newly formed group, Tosa Together, held a forum focusing on the killing, and where to move from here. The victim’s family were invited to speak at the event. There, they disclosed yet further details unreleased by WPD, the city, or the media.

25 year old Jay Anderson Jr. was killed at around 3am on June 23d, 2016 in Madison Park. The park, popular for families and residents, hugs Tosa’s northern-most border with Milwaukee. Although WPD hasn’t identified the shooting officer, the family named him as Joseph Mensah in a protest. Mensah’s name appeared on a roster list open records requested by Cop Block contributors following the killing.

Despite WPD not officially stating he’s the shooter, the requests they link to his name suggests this by default. It’s important, however, to acknowledge the official standing that the officer isn’t identified. There may have been other officers involved as well, as the Anderson’s say Mensah’s back up was late.

Once they arrived, the family claims, all their squad cameras turn off simultaneously. It’s impossible to list these as little more than highly informed allegations, as info from the police or DA office has dried up. Most of the details known of the incident, in fact, have been disclosed by the family out of sheer necessity and desperation for answers.

No press conference was held even though very few details were initially provided by WPD Chief Barry Weber. What’s known is that the officer felt Anderson’s car was suspicious, and approached. At some point, the officer feared for their safety and fired their gun killing Anderson. Though Weber admitted he didn’t know why the officer was afraid, it was later suggested a gun was in Anderson’s car.

In an interview with Cop Block contributors Anderson’s parents, Jay Anderson Sr. and Linda, were suspicious of these claims. They say although WPD claims a gun was recovered, no pictures were taken. Prints allegedly found on the weapon are unidentified, they say, uncertain if Jay owned a gun.

Whereas Milwaukee PD detectives told them the gun wasn’t loaded WPD lieutenant’s stated it was. Tosa PD LT’s, the couple say, have been much ruder to them than Milwaukee officers. The family has yet to meet Chief Barry Weber in person.

Regular peaceful protests have rocked the case into Tosa’s consciousness mind as suspicions grow. Initial demonstrations saw officers storm Mayfair Mall, where protesters gathered, in SWAT gear, allegedly with covered badges. These marches included hundreds of people, all unanimously calling on answers and support for the family. More recent protests have been smaller by comparison, and more controllable by the department.

A more recent protest filmed by participants saw WPD station dog’s on standby for reasons unclear other than to intimidate. Mrs. Anderson also claims both her and Jay’s financi, Star Delarosa, were threatened with arrest for protesting out loud. The family also feels their phones have been tapped, and often see police riding around their home.

During the forum held by Tosa Together, the Andersons stated that eight minutes of footage is “missing” from that night. The group formed in response to the Anderson case, wanting to create an inclusive community. They are, however, unsure how widespread discriminatory feelings exist amongst residents besides law enforcement.

They all wonder how long Jay’s hands were up before he was allegedly shot 13 times, 4 in the head. “Our main concern”, says Star Delarosa, “is why [the officer] turned the dash camera off.” They ask WPD what the officer, who they say is Joseph Mensah, was doing during the lost eight minutes. Currently, claims that this amount of footage is missing remain allegations as the DA office hasn’t released details.

WPD lieutenant and spokesperson Brian Zalewski stated “we are prepared to go forward” with releasing info at the DA’s discretion. Granted, Wisconsin state law mandates police shootings be investigated by an outside agency. In the Anderson case, that outside party happens to be the Milwaukee PD instead of the Department Of Justice (DOJ). However, before Anderson was identified MPD stated it was Tosa’s responsibility to release the victim’s name.

Senator Lena Taylor attended the event, offering support and condolences to the family. Taylor understood that WPD doesn’t have complete control over the release of some details due to state law. However, Taylor feels the Anderson case highlights why the police shouldn’t police themselves. Independent parties, rather than other cops, Taylor suggests, should investigate brutality and misconduct cases.

Similar ideas are gaining headway elsewhere in the country. Just over Wisconsin’s southern border, Chicago is entertaining the idea of civilian-ran police accountability boards. Overall, the formula remains to move away from an obvious conflict of interest.

WPD’s barrier with the public, however, isn’t confined to the Anderson case. In their 2012-2014 reports, Tosa PD SOG (Special Operations Group) began collecting and analyzing “cell phone data”, without explaining how. These documents, interestingly enough, were locked away within the department until Cop Block filed Freedom Of Information Act (FOIA) requests to get them returned to the public. This, of course, wasn’t achieved without resistance from the department.

When Cop Block filed more recent FOIA’s regarding the collection of cell phone data, WPD didn’t respond for 5 weeks. It was suspected that the method may be cell site simulators, or Stingrays. These devices have been used nationwide, oftentimes in unconstitutional surveillance operations.

Contributors sent follow up emails, which WPD continually stonewalled. Eventually, administrative sergeants sent a short denial that WPD utilizes or has participated in the use of Stingray devices. How the department collects cell phone data, from whom, and for what reasons remains unknown.

This is just one in a long list of examples portraying how untransparent WPD actually can be. Because of this, reforms can’t stop at questionable shootings. The taxpayers of Wauwatosa, or any community, should be allowed access to information regarding what their police do in their community. WPD’s lack of transparency has only snowballed as time goes on, with little besides growing suspicions amongst residents to stop it. Now citizens are organizing, but they must call for true transparency. They must not settle for a band aid patching up one particular issue.