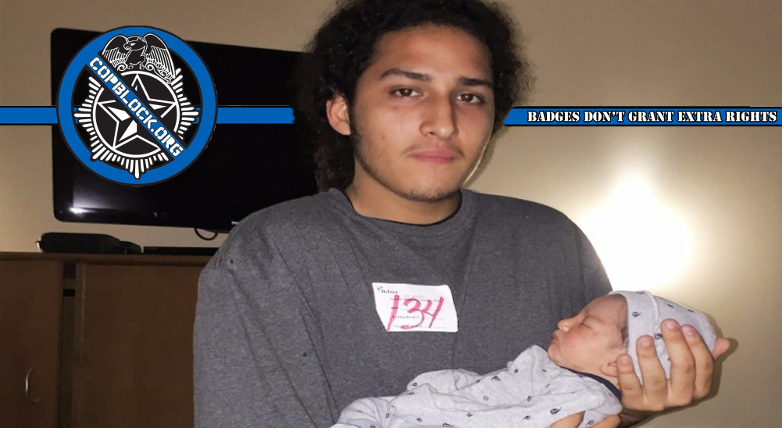 Tuesday October 4th, 2016. Aurora, Illinois at 8:41 pm. Cherries pop. Red, blue, and white. A 2003 Chevrolet Impala pulls to the side of the road at the corner of North Avenue and 4th Street. A young man squirms nervously as a 37-year-old, 9-year veteran Aurora Police Department (APD) officer assigned to the Community-Oriented Policing Unit, approaches the vehicle in which he is a passenger.

The initial reasons for the stop are unclear at this time, but what is known is that the APD officer claims he smelled marijuana and asked the passenger, 18-year-old Anthony (Scarface) Martell, to exit the vehicle. Shortly after, Martell fled and the code enforcement officer pursued Martell westbound down 4th Street. During the urban game of “cat and mouse,” Anthony and the APD enforcer exchanged gunfire.

This is where the story gets tricky. The Aurora Police Department Facebook page reports at 11:52 pm on Oct. 4th:

“According to the preliminary investigation, at 8:41 P.M. tonight (10/4), a traffic stop was conducted at North Ave., and S. Fourth St. A male subject ran from the stopped vehicle with the officer pursuing him on foot. During that foot pursuit the man who ran from the vehicle, and the officer, exchanged gunshots. The suspect was subsequently located in a backyard in the 200 block of S. LaSalle St. where he shot himself in the head. He was taken to an Aurora hospital for initial treatment and airlifted to a suburban hospital with a life-threatening wound.

A weapon was recovered from the scene. Nothing else/no one else apparently hit by gunfire or injured. The Illinois State Police will be handling the investigation.”

“The subject forced his way into a home where the family members tried to subdue him. It was then the subject shot himself in the head.” So which is it A.P.D.? Did this young man kill himself in the backyard or in the house he was trying to get into? Usually when stories change that means someone is hiding something. There have been various rumors and unconfirmed reports that witnesses to the fatal shooting claim these events to be a lie. I have yet to speak to any of these individuals in person to confirm or dismiss these claims.

So what is the cause? When ever a tragedy occurs the public cries out for a scapegoat, someone on who to blame the whole event. Was it the officer’s fault for doing his job and enforcing the laws he is sworn to enforce? Was the young man at fault for running and shooting at police as they attempted to apprehend him? Is society at fault for allowing such events to occur at all? In the opinion of this writer the blame lies solely on the belief in authority, the completely immoral war on drugs, and the subjugation of a population that believes violence is the best way to organize society.

If individuals are ever going to see an end to the rampant violence surrounding illicit drugs, individuals must first strike at the root of the problem. Prohibition. If history has taught us anything it is that when you prohibit a product or service you do nothing to curb the demand for said product or service. You simply create a black market where unscrupulous individuals will operate within that market and take advantage of the lack of accountability and transparency to the detriment of the customers and communities as a whole.

It is an issue known in economic circles as the bootleggers and baptist problem. Both groups of individuals wanted alcohol to be prohibited, but for very different reasons. The Baptists wanted alcohol banned to remove vice and sin from their congregations. The bootleggers knew that with alcohol being in scarce supply they could charge exorbitantly high prices for inferior products. The policy of alcohol prohibition resulted in thousands of lives lost on both sides of the legislation, millions of dollars wasted in enforcement, and a population confused, divided, and eventually murdered by its own government as they poisoned alcohol supplies.

One good result of alcohol prohibition was an increase in the potency of the drug, which led to the invention of the cocktail in order to mask the taste. These same patterns exist with marijuana production. From super potent flowers covered in brilliantly colored crystals, to highly concentrated gels called shatter or dabs.

Thankfully humans are quite adept at utilizing marijuana. In fact your Average Joe won’t know that humans have a canabanoid system built into their bodies.

So why did Anthony Martell die? The public may never know the truth. Perhaps he felt there was no other alternative than suicide. Maybe the A.P.D. are covering for another police murder. Or maybe he was just another victim in the long line of those individuals caught in the authoritarian web of the drug war.

My condolences go out to the friends and family touched by this horrific tragedy. Anthony’s sister has set up a GoFundMe campaign to raise money for funeral expenses. I’m sure they could use all the help that they can get during this difficult time.
You can find it here: https://www.gofundme.com/anthonymartell?ssid=776818337&pos=1

There are still lots of unanswered questions in this case. If you have questions for the APD they can be reached here: (630) 256-5000