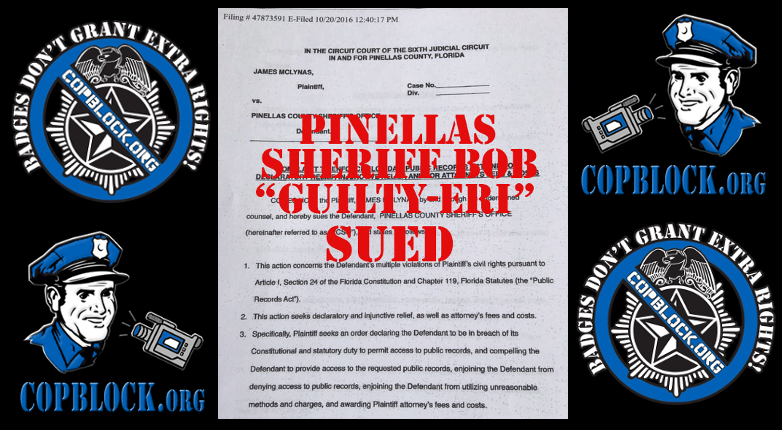 The following post was shared with the CopBlock Network by James McLynas, a candidate for sheriff in Pinellas County, Florida. In the post, which was shared via the CopBlock.org Submissions Page, McLynas discusses a lawsuit he has filed which accuses current Sheriff Robert Gualtieri, whom he is running against in the upcoming election, of hiding incriminating information contained within public records in violation of the Florida Open Records Laws.

The suit enumerates several allegations and was filed by prominent attorney Jerry Theophilopoulo (also known as Jerry “T”). Those factual allegations include:

The suit also alleges that Gualtieri and the PCSO refused to provide these records to prevent McLynas from using the damaging documents in the upcoming Sheriff’s election where McLynas and Gaultieri are the only two candidates.

Included with the lawsuit are over 50 pages of exhibits and documents proving the allegations, including numerous emails from the Sheriff’s department literally saying and doing the things they are accused of right in the emails and exhibits.

Under Title X, Chapter 119, Sheriff Gualtieri can also be charged with criminal penalties, suspended and removed or impeached if it is determined that he knowingly violated these laws while withholding the public records from Candidate McLynas. There is also a $500 per occurrence fine, which would add up to well over $100,000 in this case.

However, there are larger issues here that should concern ALL citizens of Pinellas County and even the State of Florida:

It seems pretty clear that Sheriff Gualtieri went through some extraordinary lengths to prevent McLynas from seeing these records that McLynas says will prove Gualtieri’s personal involvement in the vendetta and political sabotage of McLynas.

Why would Sheriff Gualtieri take such a personal interest in a mere records request, or enact so many new policies directed specifically at McLynas if the records showed nothing at all? The answer to that is; he wouldn’t have. Gualtieri would not have tried so hard to conceal those records and violate Florida law to hide them if they were harmless. Those records still have not been produced by Gualtieri.

Even if only half of what McLynas and his lawyer have alleged in the lawsuit is true, Gualtieri does not need to remain Sheriff of Pinellas County and instead should be sitting in the same jail cell he tried to put McLynas in for running against him.