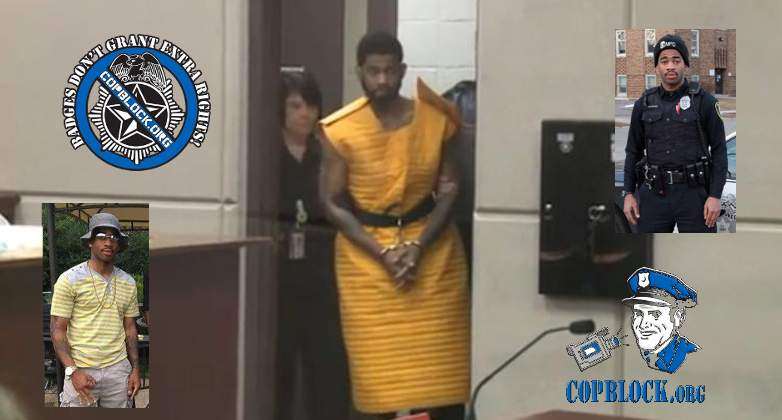 Milwaukee Police Officer Dominique Heaggan-Brown, who sparked riots in the city when he shot Sylville Smith, has been arrested and charged with raping a man. Prior to the sexual assault Heaggan-Brown and the victim had spent the night at a bar drinking heavily and watching the riots. The unidentified victim also stated that he believed he was drugged by Officer Heaggan Brown at the time of the assault.

That night, before they left the bar, “AV1” (as he is referred to in the complaint) said that Heaggan-Brown bragged to him that “he was the boss” and that there were “no limitations” on how he lived and that he could do whatever he wanted “without repercussions.” Shortly after they left the bar the victim said that he couldn’t remember anything until he awoke to Heaggan-Brown raping him.

Officer Heaggan-Brown claimed that the sex was consensual, although he admitted to a sergeant (identified as his “mentor”) he called looking for help covering up the crime that the victim was extremely drunk and “acting funny” at the time. That, of course, means that legally it wasn’t consensual, something that Heaggan-Brown should be well aware of being a police officer.

Beyond that, he is also facing two counts of prostitution for offering two people money for sex on at least three occasions dating back to 2015. In addition, he faces another allegation of sexually assaulting a different man in July and taking nude photos of that man while he was passed out. So, obviously there seems to be quite a long pattern of Heroic behavior by Officer Heaggan-Brown.

Heaggan-Brown took the victim to a bar late on the night of Aug. 14 where they drank heavily and watched TV as coverage of the protests aired, the criminal complaint said. The victim told investigators that Heaggan-Brown bragged that he was the boss and that there were “no limitations” on how he lived and that he could do whatever he wanted “without repercussions,” the complaint said.

The victim told police the day after the alleged assault that he had trouble remembering everything that happened after they left the bar but that he felt drugged. He said he woke up to Heaggan-Brown sexually assaulting him. His eyes teared up as he recounted the details, the complaint said.

According to the complaint, the man was nearly unconscious when Heaggan-Brown took him to St. Joseph’s Hospital early on Aug. 15. The officer told a security guard who helped him wheel the man inside that the man had had too much to drink and was “completely out, zonked out of his gourd,” the complaint said.

But when nurses began providing aid, it said, “AV1 flipped out.” It quoted him as saying, “Help me, help me, he was touching me.” The terrified man grabbed the security guard’s arm with “a little child death grip.” And after he was secured in a four-point restraint, out of sight from the defendant, he exclaimed: “He raped me, he raped me,” the complaint said.

Later that morning, Heaggan-Brown texted his mentor, Sgt. Joseph Hall, saying he had messed up “big time,” the complaint said.

“Need your help big time. … But need to handle this the most secret and right way possible,” the text read in part. The sergeant told investigators that Heaggan-Brown claimed the sex was consensual but “admitted that AV1 was messed up and acting funny while at the defendant’s residence.”

Using photographs and other data from the officer’s cellphone, the complaint said, investigators determined that Heaggan-Brown offered two other people money for sex several times — in December 2015 and in July and August of this year — and that he sexually assaulted another unconscious person in July, and photographed that victim naked without that person’s consent.

The charges include two felony counts of second-degree sexual assault, two misdemeanor prostitution counts and one felony count of capturing an intimate representation of a person without consent.

Of course, like most Bad Apples that finally do something bad enough to force the Good Cops working with him to impose some repercussions on them, Officer Heaggan-Brown has a history of misconduct that should have caused him to be removed from the barrel long ago. However, it was instead ignored creating that “I’m the boss” who can do anything “without repercussions” attitude that eventually leads to a murder or at the very least unnecessary use of force that is just too big for their “mentor” to help them out big time with.

Part of that troubled history includes his probationary period having to be extended for unspecified reasons when he was first hired. Several people within the community also came forward with stories about overly aggressive behavior by Heaggan-Brown prior to the shooting of Sylville Smith. In fact, Heaggan-Brown is an aspiring “gangsta” rapper, who can be found singing about wanting to “start a riot like it’s Baltimore” on a Youtube video (embedded below) not too long before he did just that.