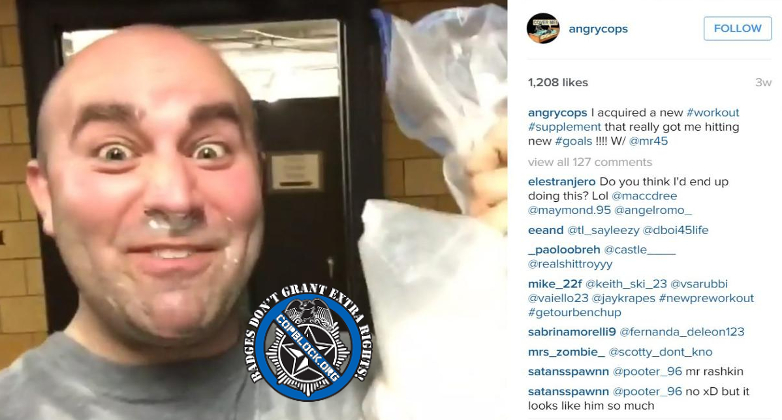 Richard Hy, a Buffalo Police Officer who became internet famous for 15 minutes earlier this year when he was suspended for posting satire videos making light of police brutality and other types of misconduct has now been charged with harassing and choking someone he was involved in an “altercation” with.

The unnamed victims were said to have been recording a music video using their cell phones when they were involved in some sort of incident with Officer Hy and an off-duty West Seneca Police Officer, whom the department has refused to identify. Although, very little details have been released concerning the incident that happened on September 13th, Hy was charged with harassment and “obstruction of breath.” The West Seneca Police Officer has reportedly been suspended as well while an internal “investigation” is being conducted, although whether he is on a paid or unpaid vacation was not specified.

Previously, Officer Hy had received quite a bit of notoriety when he was suspended by the Buffalo Police Department in February of this year for posting “Vines” under the title “Angry Cops.” The satirical videos uploaded to that channel included many that joked about prison rape, police brutality and shootings, and stealing from the evidence room. One of them included a video in which he claimed to have stolen a bag of cocaine from evidence and can be seen with (presumably) simulated traces of coke on his face.

Being that cops, including Officer Hy now, are routinely caught doing those things, it didn’t sit well with his department once he began to get a large following on various social media sites. He was suspended for 22 days for violating the Buffalo Police Departments’ social media policy. Partly because he often did the videos in uniform with his badge and name tag clearly visible.

At the time, he defended his videos to the New York Daily News:

Hy, 29, told the Daily News he thought the clips humanized cops at a time when police tactics are under scrutiny nationwide.

“Did I do anything for malice? Absolutely not,” he said.

“I just thought it was harmless fun…”

“It was kind of like a visual diary, just to show the lighter side of the job,” he said.

As is often the case though when cops show their true nature and thought process by making jokes about assaulting or otherwise harming citizens, that fun wasn’t so harmless back in September when he was caught actually choking someone, which is kinda why police tactics are under scrutiny nationwide.