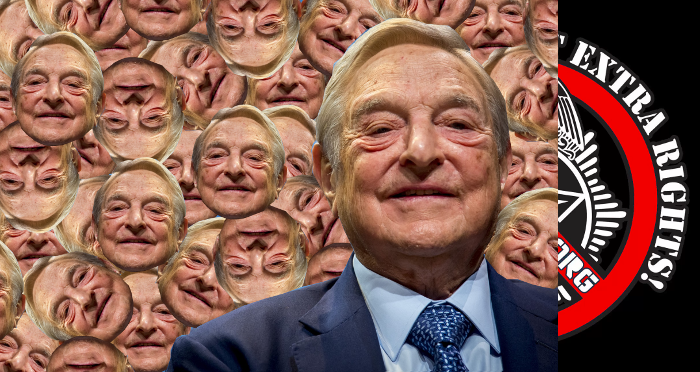 Is George Soros one of the ruling elite? – Definitely

Is ol’ Georgey Boy responsible for everything? – Definitely not.

It has become fashionable to tie every evil of the world to the man born in Hungary as György Schwartz, oligarch extraordinaire. And though he may have undue influence and incredible responsibility, not even the world’s biggest douchebag could create our police state predicament on their own.

The police state is the culmination of a ragged evolution of laws and their enforcement throughout history, destructive public ideologies manufactured via social conditioning, and the machinations of the many agendas of the members of the ruling elite – of which House Harkonnen is only one of many.

To reduce every problem to a single player in the game of class privilege is to turn a blind eye to its other many influences. There are many human attributes and individuals contributing to the problems. If the answer was as simple as targeting one contributor, the problem would never exist.

The history of power structures is ripe with examples of conspiracy. It is certainly still happening today. And no doubt it contributes to the police state. But that is only one reason, of many.

From the policewoman’s son who supports his mother unconditionally, to the politician who gathers votes under a banner of “Law & Order”, there are a number of factors -social and institutional – that have created this problem. What we need to do is question the most essential questions of our existence.

What police state propaganda does is to verify the supremacy of the state, its  laws and enforcers. What we need to do is look far beyond that narrative.

The “George Soros did it.” narrative just helps to reduce the discussion to a single part. Until we are willing to address the whole of organized force, these problems cannot be solved.

Dark Emperor Soros is probably at the top of the human enemy list, but to reduce every issue to his influence only helps to forward the narrative that the problem is individual, and not structural.

Abolish police and the state.