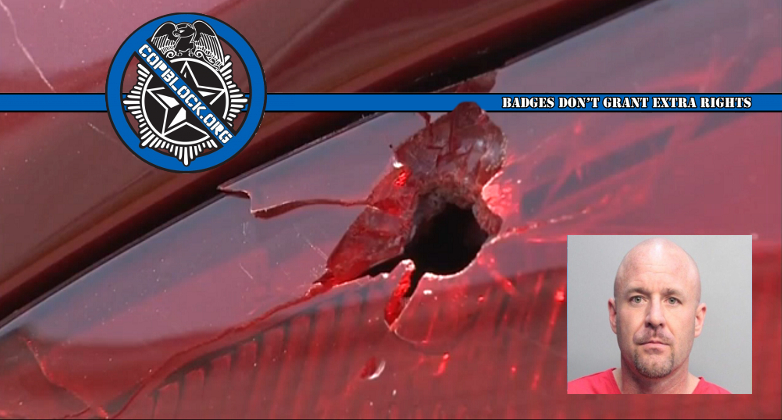 Miami-Dade Police Officer Jonathan Lang has agreed to plead guilty to shooting at another car during a road rage incident in July 2014. The other car, which Lang had cut off prior to firing a gunshot into the back of their car, was driven by Miami-Dade Corrections Officer Georgina Illa.

Lang’s story started when corrections officer Georgina Illa said a driver in a white car cut her off on the Turnpike near Southwest 153rd Street. Illa said as she went to pass the car, someone threw out a cup of some liquid and then pulled out a gun and shot.

The bullet went through Illa’s taillight, through her trunk, and then lodged in the rear seat of the car. Illa said she flagged down an officer driving nearby, who then pulled the suspect’s car over. Illa said she also stopped and that’s when one of the officers on the scene told her a Miami-Dade Police Officer fired his gun.

After the accident and before his van was searched, Lang showed up to the impound yard, opened the door to his van, and took the gun. The gun was never found, although he was caught on surveillance camera taking it. (That video can be viewed below.)

In the surveillance video, first obtained by NBC 6, a white Mazda SUV that authorities say was being driven by Lang arrives at an tow truck lot in South Miami-Dade just two hours and 35 minutes after Lang signed a document giving the investigating FHP sergeant the legal consent to search the vehicle.

And just 11 minutes later, a man wearing a baseball cap shows up and the lights flash on the car. FHP officials said it indicates he had the remote, and he quickly opens the passenger door, grabs something and exits.

The FHP trooper wrote in his request for a search warrant: “The unidentified subject removed an unknown item…and ran east bound through the…parking lot. There is reasonable evidence the vehicle was accessed by persons known to Mr. Lang.”

The FHP officer believes the property taken from the vehicle was the firearm and it was returned to Lang in order to conceal the evidence, the request reads.

When the investigating trooper did get the warrant to return to the car his records show he found ammunition but no weapon.

While the photos show pictures of weapons from Lang’s cellphone obtained in a search warrant for his house, once inside troopers receipts show there were weapons but not the elusive one, the one FHP believes was taken from the SUV at his moment we can now see.

The obvious question, of course, is why he was not in jail that soon after the incident and therefore able to go down and remove evidence from the vehicle. Just as obviously, that’s really only a rhetorical question, since he’s a cop and the normal rules involving violent criminals don’t actually apply.

On Tuesday (October 25th), Officer Lang accepted a plea deal in which he pled guilty to discharging a firearm from a moving vehicle, assault and tampering with evidence. The exact terms of the deal were not announced, but it is expected to result in a very firm slap on the wrist. (Of course, that’s not a sure thing because he shot at another cop, but the odds are still good.)