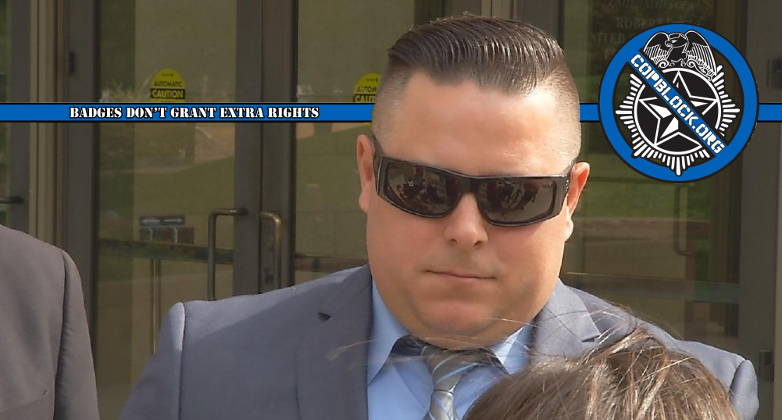 Detective Patrick Mara of the Bakersfield Police Department was sentenced to five years in prison on Monday for stealing and selling methamphetamine. Earlier this month, his former partner, Detective Damacio Diaz was also sentenced to five years in prisoner after he pled guilty to accepting bribes, tipping off drug dealers, stealing, and selling confiscated meth, and filing false tax returns as part of a plea deal. Prosecutors had been seeking at least 21 years in both cases, but Judge Lawrence O’Neill, who characterized it as a “horrible, horrible tragedy” rather than the purposeful crime that it was, instead used his “discretion” to make sure they got the traditional Policeman’s Discount.

After the sentencing, Mara said he had “folded to temptation” during the time he was with the special drug unit.

“And now I’ve got to deal with the consequences of those actions,” he said.

Mara’s first comments were an apology to the Police Department and his former fellow officers.

“I’m ashamed of my actions, ashamed of myself,” Mara said. “I apologize to the citizens of Bakersfield for betraying the trust that they had placed in me.”

Diaz has alleged widespread corruption within the Police Department, and five other Bakersfield officers were put on leave for investigation into allegations of wrongdoing tied to the situation with Diaz and Mara.

No charges were brought against any of the other officers.

Both Detectives Diaz and Mara enjoyed some local notoriety. Diaz was part of a celebrated local cross country team whose success in the 80’s spawned a Disney movie starring Kevin Costner, entitled “McFarland, USA.” Mara, however, went for a much more ironic twist. Six days before he got involved with Diaz’ meth ring, Detective Mara was awarded the title of “Exceptional Officer of the Year” by the Kern Law Enforcement Foundation.

Of course, if you’ve been paying attention to Kern County area police, you might be familiar with the sheriff’s deputy who escaped after being arrested for going on a meth binge and threatening children. Or you might be aware that a chief in the Fresno Police Department was arrested for selling drugs. So, it’s probably not that far fetched that Det. Mara actually is the Exceptional Officer of the Year there.