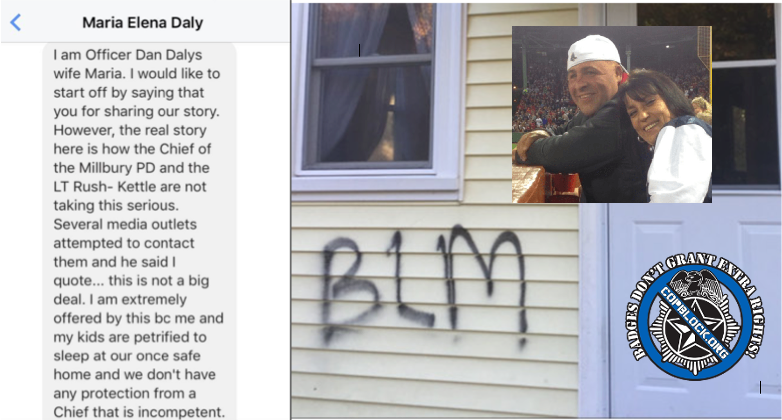 The wife of a Millbury, Massachusetts police officer has been caught faking a burglary at their home and attempting to pin the blame on members of the Black Lives Matter movement by painting “BLM” on the side of the house. At this point, the exact reason behind the hoax hasn’t been released and details are still pretty vague. However, the video embedded below contains a statement about unspecified “money problems,” which tends to imply that it was intended to justify a bogus insurance claim.

Police say on October 17 Maria Daly reported a burglary at the family home, saying jewelry and money had been stolen. She also reportedly said her house was tagged with graffiti that appeared to reference the Black Lives Matter movement.

According to Millbury Police Chief Donald Desorcy, investigators have determined the entire account was false.

“Something wasn’t quite right,” said Desorcy. “I think that was pretty obvious and as a result of that investigation, the officers did their due diligence and followed through with the investigation that we had.”

“Basically we came to the conclusion that it was all fabricated,” said Desorcy. “There was no intruder, there was no burglary.”

Just after she filed the police report, Daly took to social media saying, “We woke up to not only our house being robbed while we were sleeping, but to see this hatred for no reason.”

The chief says Daly’s husband, Officer Daniel Daly, was not invovled in the deception and has been exonerated.

It’s a story generating a lot of reaction in town.

“She must have tagged the place herself,” one neighbor said. “I don’t know why you’d do that, if you’re gonna stage a robbery, I mean really come on, you’re a cop’s wife. You should know better.”

This, of course, isn’t the first time a cop’s wife was caught with her hand in the proverbial cookie jar. Last December, I posted the video of a Florida police officer’s wife who was caught by a surveillance camera stealing Christmas presents off the porch of another cop’s family. It does seem like they should be better at stealing stuff, though. It’s almost like there’s an IQ cap for police wives, too.