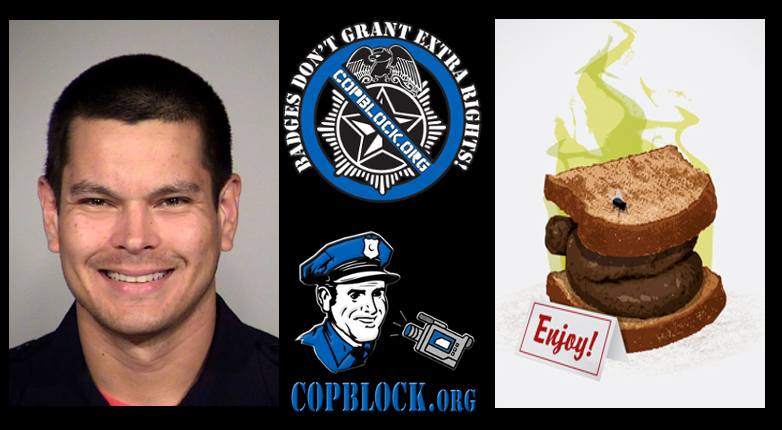 Officer Matthew Luckhurst of the San Antonio Police Department has been placed on indefinite suspension as the result of an incident in May. Luckhurst had bragged to another cop that he had placed feces inside bread and put it in a styrofoam container next to a sleeping homeless man, hoping he would eat it. That unnamed officer fortunately had some decency and told Officer Luckhurst to go back and throw the shit sandwich away. He then reported the incident to the San Antonio Police Dept.’s Internal Affairs Bureau in July.

Subsequently, the suspension was recommended by both a civilian review board and a review board comprising sworn officers. in October. After a meeting with Officer Luckhurst, San Antonio Police Chief William McManus upheld the suspension. Earlier today, both he and San Antonio Mayor Ivy Taylor released statements regarding Luckhurst’s behavior.

Via KVUE.com, the local ABC affiliate:

“This was a vile and disgusting act that violates our guiding principles of “treating all with integrity, compassion, fairness and respect’,” said Chief McManus. “The fact that his fellow officers were so disgusted with his actions that they reported him to Internal Affairs demonstrates that this type of behavior will never be tolerated.”

Mayor Ivy Taylor also released a statement Friday regarding the incident. “Firing this officer was the right thing to do,” Mayor Taylor said. “His actions were a betrayal of every value we have in our community, and he is not representative of our great police force.”

It’s not entirely clear from the news reports of the “indefinite suspension” equates to an actual firing or if that is still in the process of happening. According to MySanAntonio.com, Officer Luckhurst is planning to appeal the suspension/firing. Although Luckhurst declined to comment to the media, his lawyer, Ben Sifuentes, it was all just a joke that “spiraled out of control.”

Homeless people are frequently the targets of bullying and police are often some of the biggest bullies around. The stigma attached to being homeless and the criminalization of  homelessness are huge issues within most, if not all, cities throughout the country. Having worked with Food Not Bombs Las Vegas and personally witnessed the abusive manner that a good majority of police officers behave toward homeless people, I have very little doubt that it happened, even though he likely did consider it a joke. (And it certainly did spiral out of control for him.)

I also don’t have a lot of doubt that he will win his appeal and be reinstated. When you have free rein to murder people, trying to serve someone a shit sandwich is small potatoes. And if all else fails, he can always just move to the next police department over and continue as if nothing ever happened.