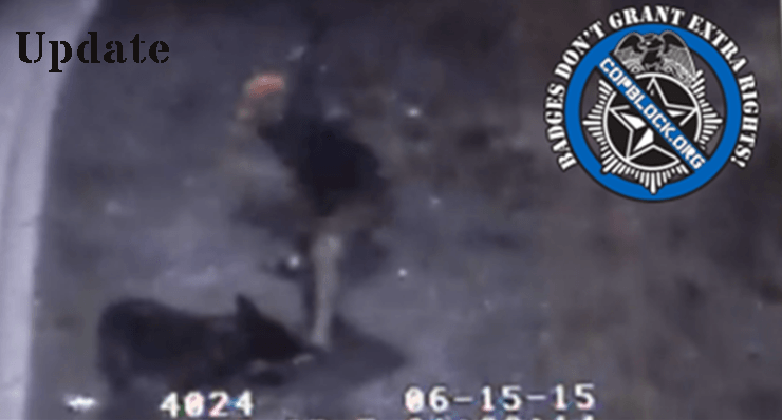 Last year, CopBlock Network contributor Asa J blogged about Deputy Brett Berry of the Ramsey County Sheriff’s Office. Deputy Berry had visited the Black Bear Casino in Carlton, MN, while attending training during K-9 trials in June (2015). Berry was thrown out of the casino for being drunk and making unwanted advances, as well as repeatedly making obscene gestures to the staff there. Shortly after he was observed by casino security on surveillance video (embedded below) abusing his K-9 partner.

The surveillance footage shows an obviously upset Berry pick the animal up by its collar, throw it on the ground, and repeatedly punch it in the face.

The docile canine can been seen trotting beside its handler, waging its tail, as it endures abuse that would make any pet owner cringe.

After the attack escalates, the dog is able to escape, and runs back to the casino. The footage shows Berry run after the animal before striking it multiple times outside a vestibule, police say.

After the security guards reported his assault upon the dog to the Carlton County Sheriff’s Office, Deputy Berry was sent home from the K-9 trials, placed on administrative leave (also known as paid vacation), and charged with animal cruelty. He was subsequently sentenced to (just) a year of probation. In April, he was fired by the Ramsey County Sheriff’s Office.

However, on October 31 an arbitrator ruled that Berry should be reinstated, because this is the only time he has been caught on camera savagely beating a dog and he said he feels really bad about it. Of course, someone who has a documented history of resorting to violence when angry doesn’t pose a threat to the public while working as a cop. Instead, he will be on double secret probation and will not be allowed to work with K-9’s anymore.

Via the Twin Cities Pioneer Press:

In a decision filed Monday, state arbitrator Gil Vernon wrote that the sheriff’s office did not sufficiently consider mitigating factors when it moved to fire Berry, and those factors show Berry is at a low risk of future misconduct. He noted that Berry had been forthright about his behavior that night and he sought alcohol abuse treatment afterward.

“The record shows he has nearly 20 years of incident-free service with good evaluations,” Vernon wrote. “He spontaneously, contritely, sincerely and without equivocation accepted his responsibility. Next he without prompting moved immediately to address his underlying personal issues.”

Vernon noted that the canine Boone suffered no physical injuries, and several of Berry’s supervisors said they expected no problems if he returned to service.

Vernon ordered that Berry be reinstated to active duty immediately but with the restriction that he cannot work with canines. He also ruled that the county does not have to repay Berry the back wages he lost since his termination in April.

“The permanency of his reinstatement is dependent on the successful completion of the terms of his misdemeanor probation,” Vernon wrote. “Based on (Berry’s) record and reaction to this incident, the Arbitrator is convinced that it was an aberration and that he deserves another (but last) chance to resume his career.”

In addition, Sean Gormley, the head of Law Enforcement Labor Services of Minnesota, Deputy Berry’s local police union, stated, “Officer Berry has the support of his fellow officers, and we believe he can still be an asset to his department and to the people of Ramsey County,” because it’s almost impossible to do something (outside of exposing corruption within the department) that would eliminate that support.