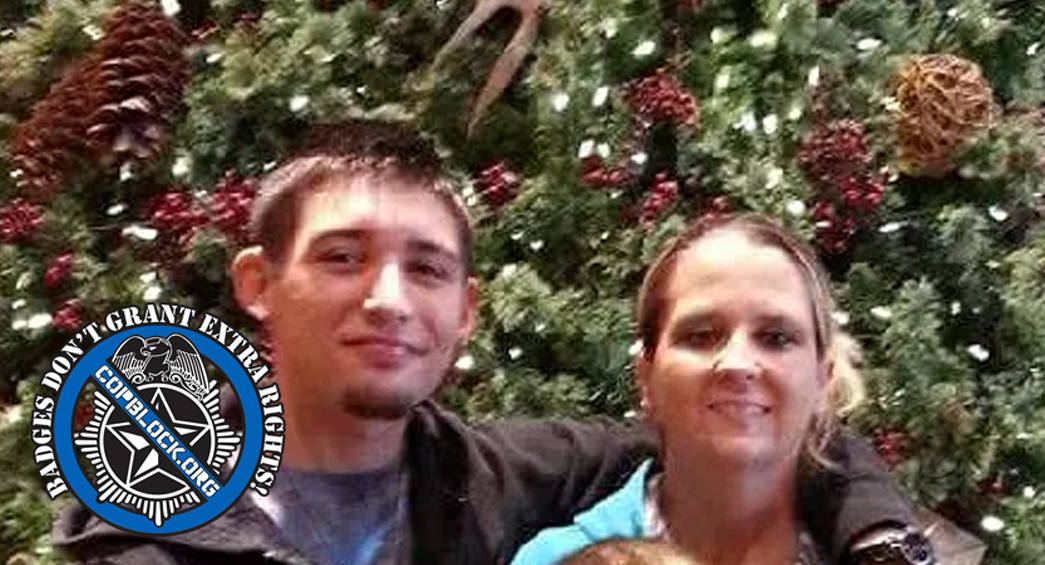 On November 25th 2015, twenty-three year old Magnum Phillips had an argument with his fiance Amanda, who were to be married on December 31st 2016. So she temporarily locked him out of their house. Mr. Phillips just wanted into his house. So he called 911. While on the phone with 911, he and Amanda worked it out and she let him back in. 911 personnel said they would disregard the call, but an Officer still showed up.

Officer Kolby Helms’ narrative is that Magnum took Helms’ gun while it was still in Helms’ hand and slid his finger in the trigger guard, then killed himself. However, no fingerprints were found on the gun.

Helms said when he saw Magnum in the small cluttered bedroom in the corner he had a pocket knife up to his own throat. Magnum told Officer Helms to get away, but Officer Helms, whose duty weapon was already out and pointed at Magnum’s chest, preceded to move in on Magnum. Helms said he grabbed Magnum’s right wrist and they “fell” onto the bed where the struggle happened that led to Magnum being killed.

Southwest Missouri Cop Watchers took interest in this officer involved killing and Sunshine requested (state FOIA) the complete investigation. We found concerns in the investigation and have come to a different conclusion than what the Greene County prosecutor came to which of course was “justified.”

We want to point out first that five Springfield police officers responded to the scene. Only one Officer followed SPD policy to have both dash camera and lapel mic on.

Below we point out discrepancies in the investigation. Why did Officer Helms’ story change?

Corporal Marcum was the first Officer to respond to the scene after Magnum was killed. He is also the officer to brief the investigating detectives of what happened that night. This would have been the story Helms told him, there is no other way for this officer to know what happened unless Officer Helms told him. So the first story that is told is once Officer Helms was in the home he heard a male in the back of the home which is why he went to the back of the home.

But that is not the story Officer Helms told next. He said that while he was in the home he noticed blood drops throughout the kitchen and living room and that the trail went to the back of the home. He said since he saw the blood drops on the floor he needed to search the home to ensure his and others safety. That may not seem like a big issue but when it involves a person being killed every discrepancy matters.

Officers responded to Officer Helms’ location soon after he shot Magnum. Amanda and her Mother were quickly separated and brought to Springfield Police Department to be interviewed in separate rooms, which is a good standard procedure to make sure witnesses do not talk to each other to get a story straight. Both Amanda and her mother said Officer Helms just opened the door and walked into the house without permission. Both contradict Officers Helms’ narrative on how he made it into the home legally to see the blood droplets on the floor.

Two witnesses in the home contradict Officer Helms’ narrative of getting permission to enter the home. Officer Helms did not have his dash camera recording or lapel mic on to record anything that happened that night so he has no evidence to support his claim of legally gaining entry into the home.

Below is what Amanda said. Her mother who was also in the home said Officer Helms just walked into the home.

There was no reason for Helms to be there anyway.

We heard the 911 tape and are baffled at why the 911 call taker/dispatcher sent Officers to that location. Magnum was very calm during the call and respectful. He freely gave his address and phone number without hesitation and asked the 911 call taker if he would like to talk to anyone else there, to which he responded. “no, that’s OK.” The 911 call taker did hear Amanda curse in the background, but it was in a normal tone not one of a raised voice.

The 911 call taker thought it might have been because they had gotten locked out and he put that in his notes about the call.

Officer Helms also exaggerated the dispatch call to him.

In Officer Helms’ report he said they were told the 911 call taker heard a loud disturbance
involving a male and female yelling. This is a big exaggeration. There is no yelling heard by the 911 call taker and he does not put in his notes anything about yelling.

The dispatcher that sent Helms and Marcum to Amanda and Magnum’ home did not say there was yelling. All she said was “respond to a possible disturbance originally the caller had locked himself out, but was able to get back into the home, but it sounded like there was a possible verbal disturbance in the background with a female”.

Below is the dispatch call.

Officers exaggerating in their reports, especially reports regarding encounters where they have taken a life matters very much. They are painting the encounter to look justifiable. Officer Helms’ hands have no blood on the outside of them, which is very odd because Magnum’s hands have fresh blood on them. We feel that with as much blood that was present on Magnum’ hands that there should be more blood on Officer Helms if his narrative is correct.

Helms’ left palm has some blood on it, but not a lot. He said he grabbed Magnum’s pocket knife. He doesn’t say which hand he used to grab the pocket knife, his right hand had a hold of Magnum’s right wrist, which supposedly had the knife in the right hand, but he might have reached across his body with his left hand to grab the knife and then toss it to his right side in the corner of the room.

Helms said Magnum took his left hand and placed it on his right side and pushed him off at one point to his left. If Magnum’s bloody left hand touched his uniform, why doesn’t his uniform have blood on it? How could blood from his left hand get on the gun, but not on his uniform when he touched his uniform first? Also, Helms’ said he gave Magnum chest compressions. He said he ripped Magnum’s shirt open to get better contact with his chest. So, he had to move Magnum’s right arm from across his chest and down to his side. Where is the blood transfer from Helms’ palm to Magnum’s chest?

We also believe the fresh blood on the gun would have transferred to his hand when he holstered his gun. To us it looks like Officer Kolby Helms cleaned his hands before SPD took pictures for the investigation. Magnum was 123 pounds and stood 5’7. Helms weighs 190 pounds, plus the weight of the duty belt and vest he was wearing that night, and stands 5’11. Helms was on top of Magnum. He said he had a hold of Magnum’s right wrist and brought Magnum’s right hand across his chest to press it onto the bed above his left shoulder.

Magnum is heard telling Officer Helms to “get back,” and to “ leave me alone”.

Officer Helms said that while he was on top of Magnum that Magnum took his left non dominate hand across his chest and the right arm already across his chest to grab Officer Helm’s gun, which was in his left hand. Officer Helms said that he was grabbing the gun to pull it down to his own face. He said this little 123 pound man over powered his own 190 pound strength and the leverage he had from being on top. That Magnum’s non dominate left hand overpowered his dominate left hand to pull the gun down to his own cheek, to then hold it there long enough while Officer Helms is pulling it away to put his finger or thumb past the officer’s finger already in the trigger guard to fire the gun.

The bullet wound was loose contact with a ring of soot that was 1 and 1/4th inch in diameter around the wound, as well as a partial muzzle print around it. The trajectory of the bullet was front to back, right to left and upward through the right cheek.

Officer Helms is the only one to state that Magnum yelled at him to “kill him,” and “to shoot him.” Neither Amanda nor her mother report hearing Magnum yell this at Officer Helms.

Our Opinion of this 15 second encounter

Below are screenshots of what Officer Helms wrote in his report and screenshots from the detective’s report when he interviewed Helms.

The bottom line is that Officer Helms’ actions only escalated the situation.

If Magnum was suicidal, Helms should have backed out, took Amanda, her mother, and son outside and then waited till a crisis intervention team got there. Helms was a new graduate of the academy and knew what he should have done if it was a mental health issue he was facing.

We also want to point out the Springfield Police Department redacted the last few sentences of Officer Helms’ report, they redacted a few items of evidence, and they redacted a lab report from the Missouri Highway Patrol.