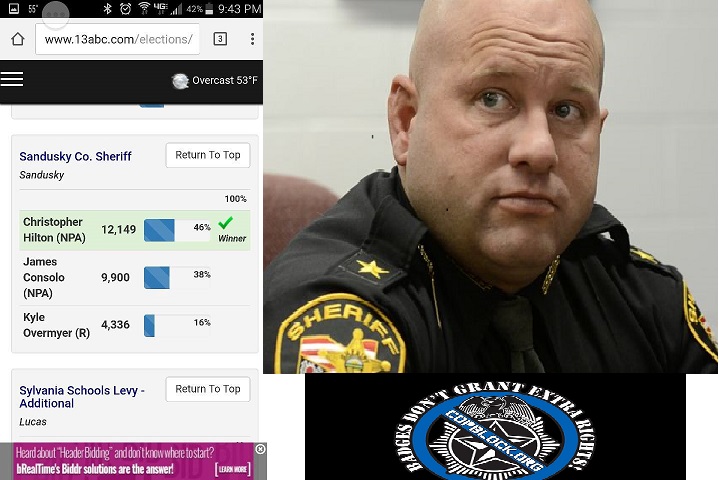 The election of Donald Trump is not the only surprise that came from election day. It was brought to my attention by Robert of Sandusky Area CopBlock that, 4336 people in Sandusky, Ohio have cast their vote to re-elect a sheriff who is currently serving time in the Marion-Hardin County Jail, in Erie County. He has been charged with over 40 charges, including 38 felonies in which, he deceived to obtain prescription drugs, tampered with records in the department’s Furtherance of Justice account and stole prescription pills from drug take-back boxes at county police departments.

The NewsMessenger, a local Sandusky paper, reports from the time of the indictment:

“He was indicted on various counts of deception to obtain drugs, filing a false financial affidavit, tampering with records and theft of drugs,” Hamilton O’Brien said Tuesday night.

The indictment, which was released by the Ohio Attorney General’s Office Tuesday night, also alleges that Overmyer falsified financial statements between January 2009 and August 2016.

Last January, it was revealed the state was investigating Overmyer in connection with the collection of take-back prescription pill boxes from county police departments, also included among the 43 charges in the indictment.

During this period, Overmyer is alleged to have improperly collected the boxes from April through August of 2015.

Also included in the indictment were allegations that Overmyer tampered with records between November 2013 and December 2015.

Overmyer is expected to appear in court Wednesday before visiting judge Patricia Cosgrove.

Here he is being booked into the Marion-Hardin County Jail: Yet, 4300 people in Sandusky still voted for him for sheriff! This shows why theirs such a lack of accountability. Some people in Ohio refuse to demand it from their public servants. Ohio is the home of the original copsucker, so the confusion is understandable. Ohio is also the state that tried to elect another criminal. Anyone remember the name Jimmy DiMora? A convicted racketeer, the people of Cuyahoga county decided to vote for him while he was in jail as well.

At the time of Dimora’s conviction, Cleveland.com reported:

Afterward, Stephen D. Anthony, Special Agent in Charge of the Cleveland FBI said: “There are lots of reasons to be positive and optimistic going forward. It is our hope this case will give pause to any individual who considers violating the public trust.”

Except when it comes to the police, I guess. The people of Ohio had better start realizing that it is more than just a few bad apples. The police and sheriff’s departments in Ohio are rife with corruption and abuse. The people in Ohio need to start expecting better from the people who seek to oppress them. They also need to recognize when a bad apple needs to be tossed in the lake!

For four years now, I have been trying to tell the people in Ohio to film the police, yet I still don’t see too many people doing it. The people in Ohio are not holding these people accountable. It seems the people of Ohio have accepted the fact that the police here will do what they want and there is nothing we can do about it. Those that don’t, roll around with this “As long as I stay off the cops’ radar, I’m good” attitude. Well then don’t be surprised you live in a police state, you did it to yourselves!! Especially when you continue to try to elect criminals to lead you!