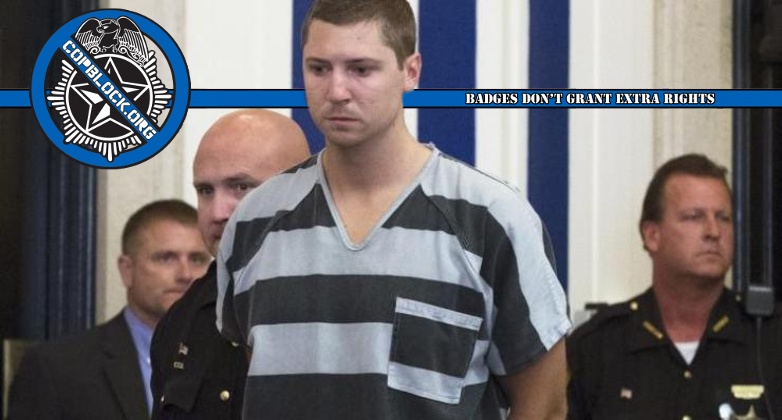 Looks like another killer cop is going to get away with murder. Wait, Ray Tensing isn’t even a real cop is he? He is just some over macho, glorified security guard isn’t he? University of Cincinnati security Guard right? Cleveland.com reports that the prosecutors said Tensing’s testimony contradicted itself so how can they be hung?

CINCINNATI (AP) — A judge declared a mistrial after a jury said it was deadlocked Saturday in the case of a white former police officer charged with murder in the fatal traffic stop shooting of an unarmed black motorist.

The Hamilton County jury had deliberated some 25 hours after getting the case at noontime Wednesday following Judge Megan Shanahan’s instructions. University of Cincinnati police officer Ray Tensing shot 43-year-old Sam DuBose in the head after pulling him over for a missing front license plate on July 19, 2015.

Tensing, 26, testified he feared he was going to be killed. Prosecutors said repeatedly the evidence contradicted Tensing’s story.

You may remember the very graphic video of Sam Dubose’s murder. I will not be of such low class to repost it here. You can find it here on CopBlock.org. It was Tensing’s own body cam that captured the whole thing. Wait, why does campus security have body cams and every single Ohio cop does not?! Well that’s a question for another article! “It’s obvious to me you have made a sincere and contentious effort,” the judge said before setting a new hearing date for Nov. 28 to determine whether the case will re-tried.

The shooting is among those across the nation that have raised attention to how police deal with blacks.

To convict Tensing of murder, jurors would have had to find he purposely killed DuBose. The charge carried a possible sentence of 15 years to life in prison.

Legal experts say juries generally tend to give police officers the benefit of the doubt because of the inherent dangers of their jobs, but that they will convict if the police actions were clearly unwarranted.

In tearful testimony Tuesday, Tensing said his arm was stuck in DuBose’s car after he tried to stop him from driving away by grabbing the car keys.

I call to attention two very important points here. 1. To convict Tensing of murder, jurors would have had to find he purposely killed DuBose. The charge carried a possible sentence of 15 years to life in prison. And 2. Legal experts say juries generally tend to give police officers the benefit of the doubt because of the inherent dangers of their jobs, but that they will convict if the police actions were clearly unwarranted.

Number 2 pretty much guarantees that number 1 will not happen in this case, and that the family of Mr. Dubose will still not see justice for their loved one. When do we say enough? How egregious does a police officers actions have to be before people will realize that they are full of shit? The trials and tribulations in dealing with the police are hard enough without them getting special treatment in court! I have said many times, ” Cops lie for a living, but put them on the stand and you swallow their word like tripe!”

An expert hired by prosecutors said his analysis of the former officer’s body camera video shows the officer was not being dragged by the car. A defense expert countered that the video shows Tensing was justified in fearing for his life because his body was “violently twisted” during the confrontation.

Hamilton County Prosecutor Joe Deters suggested in questioning that Tensing had racial motives, saying a study found that eight of every 10 drivers Tensing pulled over for traffic stops were black, the highest rate of any University of Cincinnati officer. Tensing also made more traffic stops and citations than other UC officers. Deters also pointed to a T-shirt with Confederate flag on it that Tensing was wearing under his uniform the day of the shooting.

Tensing said he was often unaware of a driver’s race, did not single people out unfairly and was not racist. He testified that the Confederate flag on his T-shirt had no meaning to him.

The trial was conducted under beefed-up security, and city officials had met with civil rights and faith leaders in the weeks before it began in hopes of reducing unrest. The city suffered 2001 riots sparked by the fatal shooting of 19-year-old Timothy Thomas, a black man who was wanted on misdemeanor warrants and was fleeing from police. Hundreds of people were arrested in the several days of violent protests that caused millions of dollars in damage.

The University of Cincinnati fired Tensing last year after his indictment. It has restructured its public safety department and made other policing reforms. The university reached a $5.3 million settlement with DuBose’s family, including free undergraduate tuition for DuBose’s 13 children.

You have to give the university credit, though. At least they did the right thing and fired Tensing immediately following his indictment, and settled a lawsuit with the family and have college funds available for all 13 of Sam’s kids. Seems the least they could do, and also something you never see from police departments. They fight against justice and the settlements they are to pay out. Another thing? The university isn’t using taxpayer money to pay the settlements! Looks like we were right when Ademo said that he knew he was gonna walk!