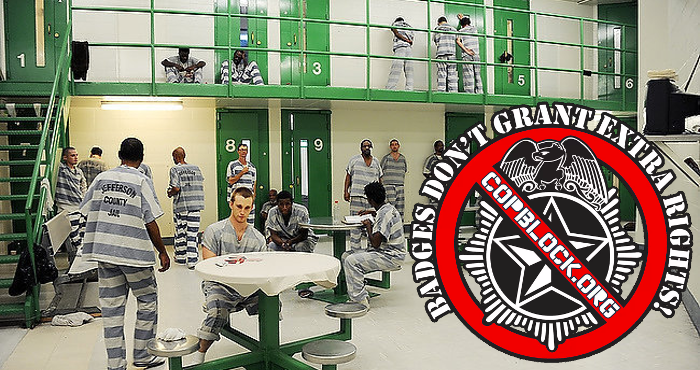 We treat jails as though they are a normal, rational part of existence, when in fact they are an inhumane institution of torment designed to destroy the people inside of them and escalate criminal tendencies to fill more jails.

Although there are no readily available facts on exactly how many people have been arrested in the United States since, surprise…not the kind of information the police state really wants out there, the best estimates usually place about 30% of the population as having spent at least some time in jail.

That means that about 70% of the population has no idea what it is like to be locked up in one of them, or what they are really like.

Even a large portion of that 30% of those who have likely spent very little time in jail. They probably didn’t really spend time on a cell block with regular population. And there is a good chance they arrived drunk and slept through the experience.

So the percentage of people who have spent days, weeks, months and years locked in city or county jails and have a really good idea of what they are like is very small. And so the public has no idea how horrible they are.

When many people think of jail, especially older people, they think of the little barred-in rooms of old movies. But even when they do have a visual image of a concrete bunker they have no idea what it is like to be in one.

That little concrete cell is an echo chamber where every sound and voice reverberates into the next in a nonstop audio torture. Even the silence permeates the cell like a maddening fog. During waking hours there is constant noise. There are loud, boisterous meatheads who don’t seem to mind and just keep piling it on. Anyone who thinks that jail is a good place to think about what you have done should try memorizing the Magna Carta in a jet engine testing facility and let me know how clear your mind is on it after.

Every sense is similarly attacked. The constant lights, fluorescent and flickering, never allow a darkness to find respite within. The nose is assaulted with the functions of other inmates bodies all around the clock. The food is designed to destroy the connection between pleasure and nutrition. The clothes, blanket and furniture all make you chaff and ache.

While all five off your senses are being brutally assaulted, there are the behaviors of the other inmates. There is the explicit and implicit aggression in every action and jockeying for position. You are tested and teased, especially by those who have the most jail time under their belts.

And the guards, if you are lucky enough to get ones who do not outright abuse you, are like waiters in a restaurant that serves indifference and apathy to a forced clientele. Nobody gives a shit about you.

These are the conditions by which criminals become super criminals. It is these conditions that escalate the evil in the souls of human beings. The sheer perceptual warfare and inhumanity of the situation turns a bad puppy into Cujo – or breaks the persons spirit entirely.

The Cujos do not mind jail. They can be heard talking about just doing the time as though it were no big deal they were being bombarded with sensory overload in a concrete bunker. These people frightened me. Not because they were mean and scary, I mean sometimes that too, but because they had allowed themselves to become the Bogeymen that their captors used to scare the general populace into going along with the horrors of the jailhouse.

As for those who allowed themselves to be broken, they became enablers of the system that broke them. They become its biggest supporters. They deny all of the most obvious problems in order to keep moving away from the horror of their experience.

So I have found myself in the rare position of those who have experienced jail and not been changed in these ways by it. Aside from a few overnight stints, I did one six day and one ten day stretch in two different jails. I escaped Stockholm Syndrome and the desire to get vengeance against a world that would do that to me. So my perspective is more honest than most you will hear.

If you support them, you support a horrifying form of social conditioning that destroys individuals and causes criminality. A jail is a feedback loop where the police state creates job security and creates unlimited growth potential. If you can live with that, I honestly don’t know how you can live with being you. Must be it’s own kind of hell.

Oh, but they have cable television!

And you think that is a good thing?