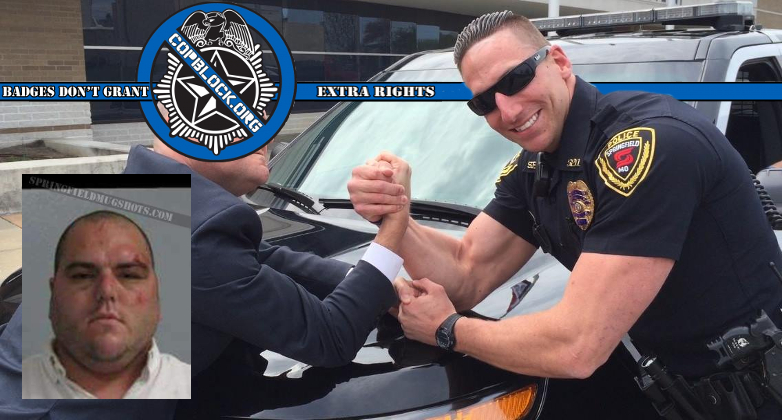 I want to start this article by showing the Internal Affairs letter from the Springfield Police Department that says one of their officers used excessive force on a citizen during an encounter on November 26th 2014. 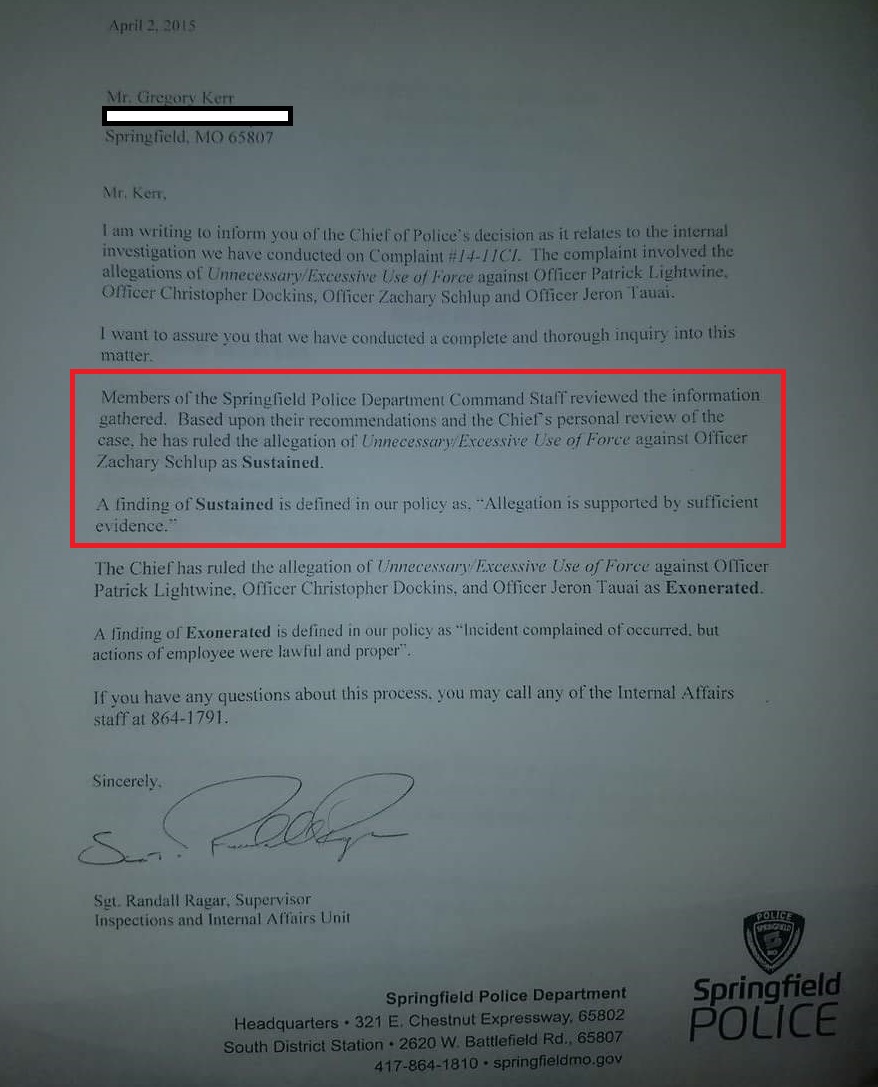 We appreciate our local law enforcement, but we must point out any wrongdoing they may do. Police are tax paid and trained governmental employees and when they do wrong it not only hurts a citizen and the trust the community has in its local LE, it takes money away that could have been spent funding the city. Police have to make arrests, everyone knows this. But we do not expect our officers to be cruel and brutal when they make an arrest.  From court records and the victim’s account of what happened the law states police should have made contact with Mr. Kerr to arrest and charge him for damaging property. Again, we know officers have to arrest citizens but they do not have to act like rabid dogs when they do it. Breaking a law does not mean you should be beaten.

Mr. Kerr got into a argument with a employee of a pizza business which ended with him punching the register and leaving.

Punching the cash register got the police called on Mr. Kerr. Springfield Police responded to the call as normal, but what transpired when they made contact with this citizen should never be considered normal. The horrific beating that occurred to Mr. Kerr while his wife and small children watched should never be seen as anything other than a horrendous violent act committed by an out of control officer we had put faith and trust into.  Again the community expects and accepts citizens being arrested when they break a law but they do not accept their Officers breaking their trust and faith that they will be a good decent humane officer that follows their department policy.

Below is the description of the encounter Mr. Kerr had with SPD Officers in his own words:

“I got into an argument at Little Caesars Pizza on Scenic St. and I got mad at the manager for putting his finger in my face and telling me to “get the fuck out.” So I punched the cash register and left. When I arrived home with my Daughter there were about five or six cop cars there and I got out of my car with my hands in the air, the officer in front of me ordered me to walk towards him with my hands up so I started walking towards him and he grabbed my arm and an Officer behind me tackled me to the ground and they handcuffed me.

They kept calling me by my brother’s name, who was wanted at the time for a small amount of drug sales. I kept telling them that wasn’t me and then Officer Schlup was behind me and started kicking me in my back and then moved up to kicking me in the back of my head until I started bleeding from my head. He then put both knees on each side of me straddling me and grabbed my head and started slamming it into the sidewalk. He then turned my head and started punching my face. About seven or so minutes into the beating, I heard one of the officers say “the corporal is pulling up.” At that point, the officers pulled me up and pushed me against a car. When the corporal walked over, I told him what they did and he asked them if they hit me and they said that I tripped and fell down and that I was lying. I said that was bullshit and that I needed to go to the hospital.

They then told me that I was not going to the hospital and I was going straight to jail. They then put me in the back of the paddy wagon and took me to booking. I asked one of the medical staff at the jail to go to the hospital because I wasn’t feeling well and he told me to quit being a pussy and deal with it. I had two seizures in jail and neither time did they take me to the hospital. In the jail they just made me sleep on the floor in one of those ‘boats’ because the jail is overcrowded.

I was able to bond out three weeks later and two weeks after I bonded out I was cooking dinner and I had my third Seizure. I continued to have Seizures ’til about six months ago when the right medicine was prescribed to me to help prevent the seizures. But with the seizures I have lost the privilege to drive a vehicle.”

I want to point out that one officer was found guilty of using excessive force and supposedly punished for it, but the other officers that were there were not investigated for lying to their corporal about the beating. Multiple officers on the Springfield police force acted as sentries while a citizen was being beaten. This is a massive problem and only shows us this problem must be more widespread amongst the department for so many officers to act as a lookout while a citizen is having their rights violated.

This is the only picture that was taken of Mr. Kerr to document any of his injuries while he was in the Greene County Jail for three weeks. 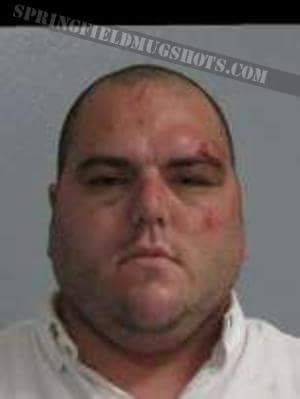 Here is one of the documents from the lawsuit against the City of Springfield to explain that Mr. Kerr was handcuffed and passive during this beating. Being passive according to SPD Standard Operating Guide does not warrant closed hand punches and kicks delivered to a citizen’s body. 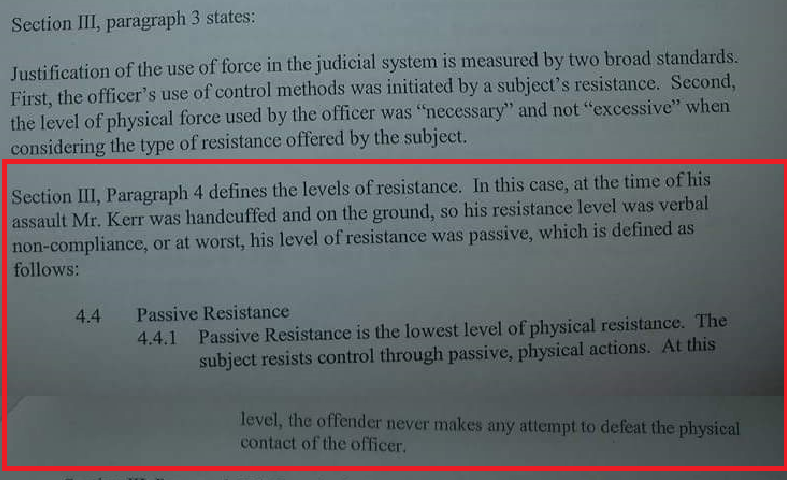 Here is a copy of a document from the lawsuit that states how much the beating cost to be treated at the hospital and that he received no medical treatment from the Greene County Jail while there for three weeks. 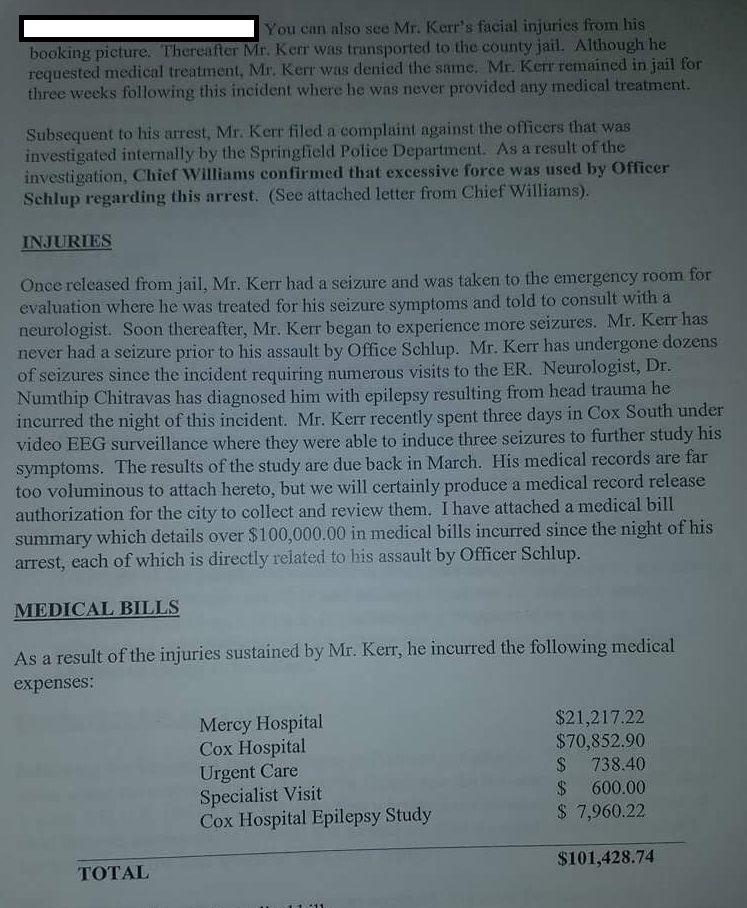 At the end of the day what we have is: