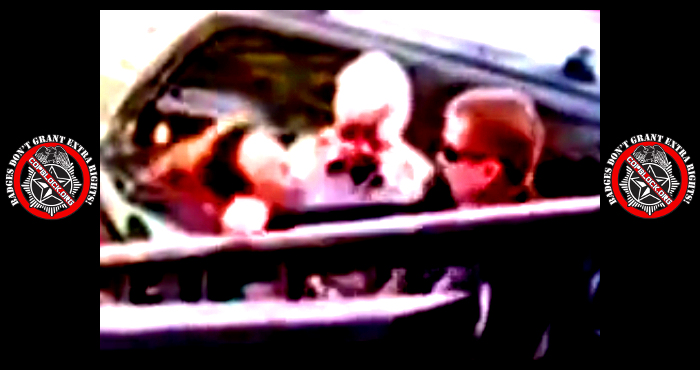 After a video which shows Flagstaff, Arizona police officer Jeff Bonar punching a woman in the face went viral, he was given a paid vacation while the departments public relations department plans its next move.

Marissa Morris was already having a bad day. Due to an eviction, she was hurriedly trying to relocate her possessions when Jeff Bonar pulled up and claimed that she had a warrant and he planned to arrest her. However, not only did the badged thug not have the warrant to show her, as is the law, he did not even explain what the warrant was for. The woman was resisting her illegal kidnapping when the power-tripping gangster decided that she deserved a punch in the face for demanding her rights.

A spokesperson for the Flagstaff police have said they they are ‘very concerned’. So concerned they are letting a violent criminal take a paid vacation while the woman remains locked up for assaulting an officer and resisting arrest. Charges which are generally given to the victims of police brutality to cover up their own disgusting aggression.

What exactly is there to investigate? If a cop showed up to a domestic dispute and a spouse had video of being hit, the cop would immediately take the aggressor to jail. What more do they need to know? This scumbag abused his power and violently assaulted a peaceful citizen demanding their rights be observed.

That his guilt remains in question is a clear indicator of the thin blue lines assertion that they are above the very laws they force.